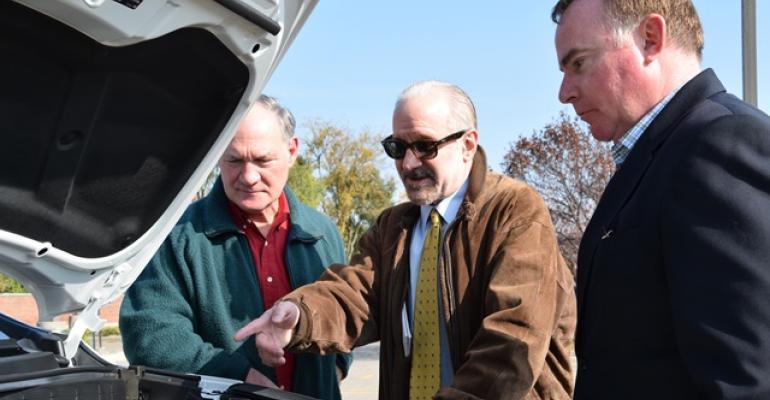 For about a decade, we have declared each year’s pool of nominees for Ward's 10 Best Engines more diverse than the last.

This year, we really mean it.

If anyone needs evidence the auto industry is taking a big-tent approach to pressing fuel-economy challenges, look no further than our nominee pool, which illustrates the many directions engineers have been heading in recent years.

At the opposite end of the spectrum is the Hyundai Tucson fuel-cell vehicle, which runs on hydrogen and emits nothing but water vapor. The vehicle is available for lease only in California, where a limited hydrogen fueling infrastructure is taking shape.

But it’s included in this year’s competition in recognition of its far-reaching technology and because automakers may need FCVs to comply with future emissions standards.

Honda, Toyota and General Motors plan to introduce FCVs in the future. New York is planning to build 100 hydrogen stations by 2020, and numerous other states and countries also are adding to the hydrogen infrastructure.

If a superpower among this year’s competitors needs to be crowned due to sheer numbers, it’s the turbocharged 4-cyl. engines. There are 14, and certain brands, such as Ford, Hyundai, Volkswagen and Volvo, have multiple entries.

Toyota joins the mix with its first 4-cyl. turbo offered in the U.S. since 1998, the new 2.0L in the Lexus NX CUV. Alfa Romeo also throws its hat in the ring with a mid-mounted 1.7L grenade in the all-new 4C roadster. Welcome back, Alfa.

For those wondering why the new Corvette Z06 is not in contention, it’s priced above our $60,000 cap. And the only new Ford Mustang engine being evaluated is the 2.3L EcoBoost I-4 because the V-6 and V-8 essentially carry over.

The pool of Ward’s 10 Best Engines nominees consists of the 2014 winners plus every new or significantly improved powertrain that meets the price cap and is available in U.S. showrooms during the first quarter of 2015.

Eight WardsAuto editors drive the vehicles in October and November during their routine daily commutes in metro Detroit, the same way most Americans experience their vehicles – going to the grocery store, visiting relatives on weekends, taking kids to school and occasionally wearing down the treads with a thick smoky burnout in a vacant parking lot.

Winners will be announced Dec. 10 at the WardsAuto Outlook Conference in Southfield, MI, (see WardsAuto.com/OutlookConference).

Trophies will be awarded to the winning automakers in January at a banquet during the North American International Auto Show in Detroit.