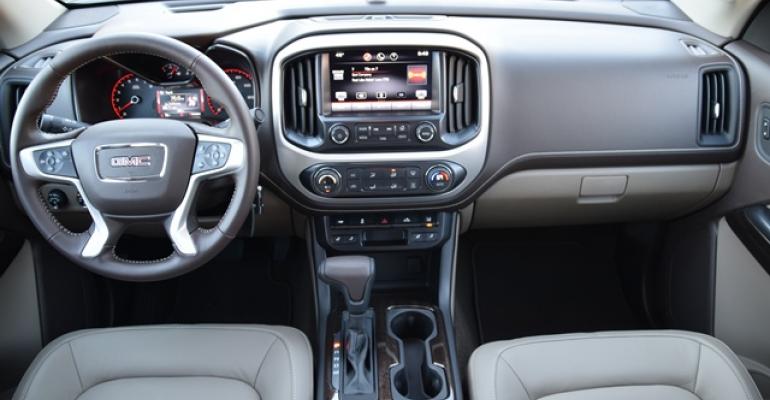 Light trucks’ perennial position atop the U.S. sales charts only can be strengthened by paying greater attention to the needs of both traditional and nontraditional buyers, says General Motors’ Helen Emsley, global design chief-GMC.

“It starts with knowing the customer,” Emsley says during a panel discussion Wednesday at the 2015 WardsAuto Interiors Conference. By forsaking the “we design for designers” approach, GMC has taken its cues from customer research involving both compilation of data and from-the-gut reaction, she says.

The interior of the all-new ’15 GMC Canyon midsize pickup drew upon input from customers who said “they didn’t want a car – but they didn’t want it to look rough or cheap,” Emsley says. “They really did not want a car-like interior” but at the same time indicated a desire for some luxury touches.

Before whittling the data down to specific trims, materials, colors and ergonomic features, GMC gathered reactions to trucks from disparate groups of “real people” including single women, seniors, “guys with beards” and, in a departure from pure consumer research, kids.

Showing the groups side-by-side photos of the same model in front of a bright red Canyon and an anonymous gray sedan, the Canyon driver was deemed cool, handsome, independent, resourceful and, according to one youngster, more likely to go to the beach than stay home and read a book.

Those sessions were edited down to a Super Bowl commercial with the tagline, “You know you want a truck.” They also underscored consumers’ desire for what Emsley calls “fullsize truck fundamentals” blended with creature comforts such as real aluminum trim, soft instrument panel with live stitching – features found in the SUVs such as the GMC Yukon and CUVs such as the Buick Enclave.

The van’s “cabin as workspace” functionality includes high seats offering a better view of the road; optional swiveling seats that allow the driver to reach the rear cargo area without exiting the vehicle; soil-resistant materials; additional height created by front-wheel-drive and a transversely mounted engine that eliminates the need for the prop shaft and rear differential.

But Nagode also lists features found in the rugged ProMaster that wouldn’t be out of place inside more sophisticated trucks: Eighteen storage spaces and, in response to U.S. customer demand, cupholders bigger and more numerous than its European cousin, the Fiat Ducato.