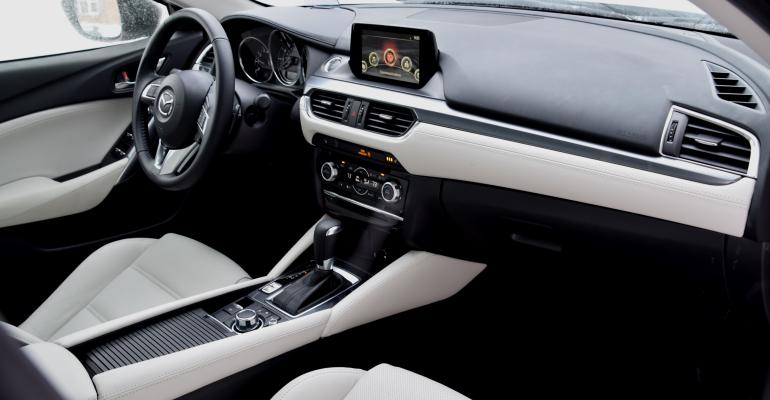 Mazda Does It Again, Only Better

It&rsquo;s the little things that separate the bigger sedan from its Mazda3 sibling and give the Mazda6 a more finely tuned appearance. The list includes a more luxurious center console, trimmed in padded leather.

Last year at this time, we were lauding the new Mazda3 subcompact, which made our 2014 Ward’s 10 Best Interiors list for its striking black-and-ivory color scheme, terrifically simple HMI and amazingly affordable price.

But Mazda refused to stop there, spinning another Ward’s 10 Best winner this year with a refresh of the Mazda6 just two years after launching the current-generation car.

Thematically, the 6 follows the same formula of its smaller sibling, but takes the whole concept up a notch in fit, finish and luxurious touches – once again in a package that is bargain priced. How could we resist?

Competition is getting tougher in the midsize sedan segment, despite its shrinking volumes at the hands of the increasingly popular CUV, and that shows in pretty impressive redesigns for the Toyota Camry and Subaru Legacy, both among this year’s Ward’s 10 Best Interiors nominees.

But the Mazda6 goes them one better. With its upscale equipment and just the right touch of bling, this looks like a luxury car, despite a decidedly average $30,195 base price for our Grand Touring test model.

It’s the little things that separate the bigger sedan from its Mazda3 sibling and give the Mazda6 a more finely tuned appearance. The list includes a more luxurious center console, trimmed in padded leather and with its twin cupholders, exposed in the 3, concealed by a glossy-black louvered door.

The car’s 7-in. (18-cm) HMI screen is more integrated with the dash than in the Mazda3, and unlike in the smaller car, there’s a full gauge package that includes both tachometer and speedometer, redesigned with a more sporty flair.

Brushed brightwork accents the instrument panel and center console, as well as the door inners. A perfect blend of piano-black and metal trim add to the car’s near-luxury chops.

The Mazda6 also makes use of the Mazda3’s automatic climate-control system, which features a clean readout and nice big dials and buttons to control temperature and airflow. And there’s no need to hunt around through the HMI to adjust the heated seats, because there’s a handy toggle for that right on the dash.

“You can wear gloves and operate the controls,” notes one judge.

We still think the HMI control, with console-mounted dial and pushbuttons, is among the easiest to use, and having a radio volume control knob right next to it doesn’t hurt either. The pop-up heads-up display isn’t luxury-car material, but most come to rely on it and ultimately are happy it’s there.

The re-engineered seats are stylish and “road-trip comfortable,” according to one tester, and include three head restraints for rear passengers, something still surprisingly lacking in some competitors. Light-up sill plates add an upscale touch.

With the redesign, the Mazda6 hangs on to its title as the best-looking midsize sedan on the planet, with an interior that is well laid out and controls that are intuitive to operate – in a car that’s priced to sell.

“Lots of zoom-zoom and some bang for the buck,” sums up one editor.