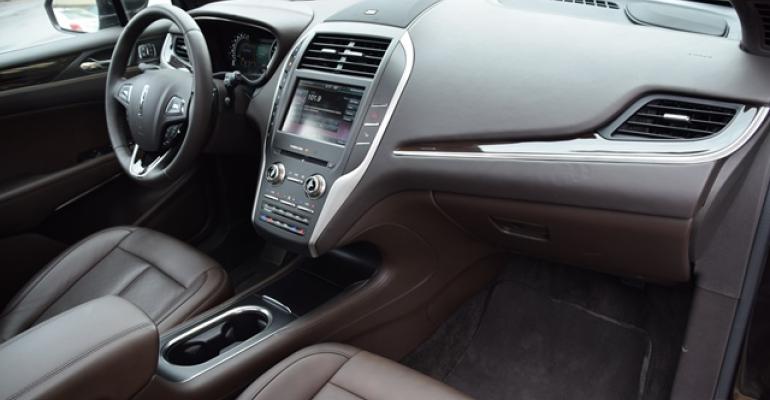 Lincoln Black Label a Step in the Right Direction

Lincoln manages to get a lot right with the new interiors, but it stumbles in some important areas, particularly fit and finish.

Lincoln has high hopes for its Black Label collection, a series of premium interior packages that allows customers to somewhat customize their vehicle.

Full customization is not possible, as it is with some other luxury brands, because there are only four offerings – “Center Stage,” “Indulgence,” “Modern Heritage” and “Oasis.”

Featuring high-end materials, including Alcantara suede and premium leather supplied by Eagle Ottawa, each package is based on a theme created by four designers from Lincoln’s dedicated interiors team.

During testing for this year’s Ward’s 10 Best Interiors competition, we drove a Lincoln MKC CUV decked out with the Indulgence Black Label interior, as well as a MKZ sedan with the Center Stage package.

Feedback was mixed. Some bemoaned the MKZ interior for its lack of aesthetics, with one judge saying it “would be cutting-edge in 2000.” But other judges were more kind, issuing praise for the “beautiful, rich colors.”

While Lincoln managed to get a lot right with the new interiors, it stumbled in some important areas, particularly fit and finish.

“Fit and finish issues from two years ago haven’t been fixed,” complained one judge, while others pointed out misaligned panels.

Cost was another sore point among judges. The MKZ carried a price tag of $58,165, while the MKC came in at $57,115. That’s a lot of money for a luxury brand that doesn’t have the credentials of most of the top contenders. Add in the fact that while the interiors are nice, they are not industry-leading.

Although Lincoln’s Black Label entries failed to snag an award this year, they are an indication the luxury brand is attempting to step up its game.

Black Label is a move in the right direction for the luxury marque, notes one judge.

“Interior is essentially the same, but with new cosmetics,” he writes. “Keep it up, Black Label.”