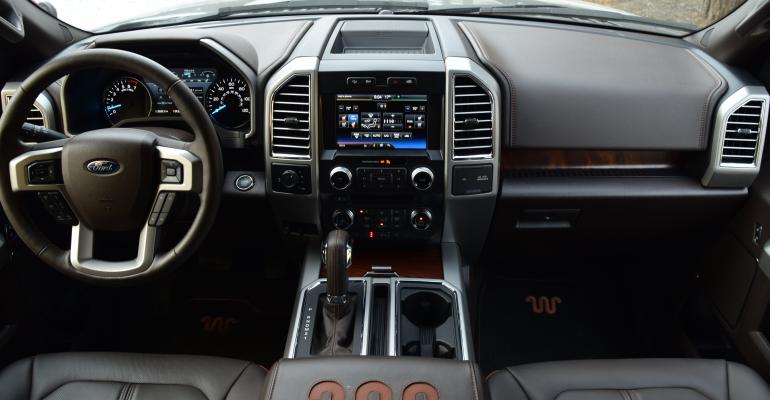 The overall execution of the interior is unlike some high-end pickups, many of which seem to have luxury trappings added on rather than flawlessly integrated.

The new ’15 F-150 garnered a lot of attention for its aluminum structure, but the stunning interior in the King Ranch edition is equally impressive.

The Western-themed motif of the King Ranch stood out among a slew of new vehicles, including top luxury marques in the 2015 Ward’s 10 Best Interiors competition, and deservedly snagged one of the coveted awards.

The overall execution of the interior is unlike some high-end pickups, which seem to have luxury trappings added on rather than flawlessly integrated.

Particularly pleasing are the plush brown leather seats with vibrant orange stitching also found on the shift knob and boot and center console. The same stitching is used for the King Ranch logo, which is emblazoned on the seatbacks and the thick floor mats.

Along the door panels the brown color leather is broken up by a metallic door grab and Khaya wood inserts lined with chrome.

Much thought went into the interior, made obvious by little touches such as the F-150 logo placed above a defroster vent.

The cabin features plenty of storage space, including the cavernous middle console that easily could swallow up a laptop, iPad or purse.

The MyFord Touch infotainment system also has been upgraded and now performs as intended, with quick responses from the large vibrant touchscreen. There are a number of redundant switches and knobs, including for the climate control and audio systems, for those who don’t want to navigate through the touchscreen.

The impressive interior garnered high praise from judges, who marveled at the level of detail and luxuriousness in a pickup, a segment typically known for utility.

“Last year, we had the Rolls-Royce Wraith,” one judge wrote on his scoresheet. “This year we have a truck worthy of that customer, who also has a rugged side.”