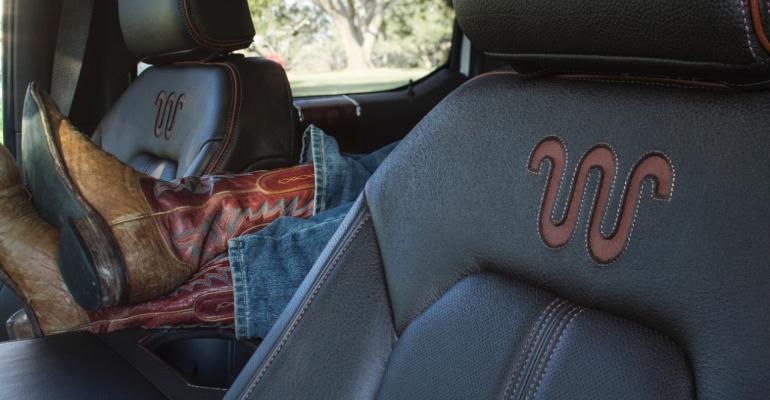 Gone are the days when truck interiors came in three trim levels: bare, barer and barest.

Domestic automakers produce some of the nation’s best-selling premium vehicles.

What, Cadillacs and Lincolns? No. Those luxury brands lag behind Mercedes-Benz, BMW and Lexus, the top three deliverers of vehicular luxury in the U.S.

But if you want a decked-out truck (and plenty of buyers do in the 2.2 million-unit-a-year pickup segment), step up to special-edition Ford, Chevrolet, GMC and Ram models.

Their names invoke the Old West: Chevy Silverado High Country, Ram Laramie Longhorn and Ford F-150 King Ranch. The latter is a 2015 Ward’s 10 Best Interiors winner, in no small part because of its sumptuousness.

Enter the well-appointed cabin (a running board that automatically slides out helps you climb aboard) and bask amid amenities such as French-stitched leather seats and rich-grain wood insets framed in chrome. Craftsmanship runs throughout.

Truck luxury tends toward the understated. Designers don’t get too foo-foo with pickups. But gone are the days when their interiors came in three trim levels: bare, barer and barest.

An auto industry axiom is that if enough consumers are willing to pay for it, they’ll get it. And people are ponying up for deluxe trucks.

The blood of that segment could get richer if Mercedes-Benz joins in. The German luxury automaker plans to introduce an impending midsize pickup in certain global markets. The U.S. isn’t one of them. Yet.

But Mercedes-Benz USA President Steve Cannon hints that with the right configurations the coming Mercedes truck could appeal to certain Americans, such as affluents who’d love to tool around in a pickup sporting a Mercedes tri-star.

“You wouldn’t see folks living in Greenwich driving a pickup truck to a work site,” Cannon says, referring to a Connecticut city with a $92,759 per-capita income level.

Original crew cabs of a half-century ago were so named because they had rear seating for transporting workers to job sites. The quarters were cramped. The bench seats were as tough as the workers’ hardhats.

Today’s upscale trucks offer assorted rear-seat creature comforts. Leather abounds. There’s enough legroom for NBAers to stretch out. And there are assorted buttons to push, including ones that heat the seats.

Just what a rich Connecticut Yankee might want. Or anyone else who likes the idea of blending utility with luxury.