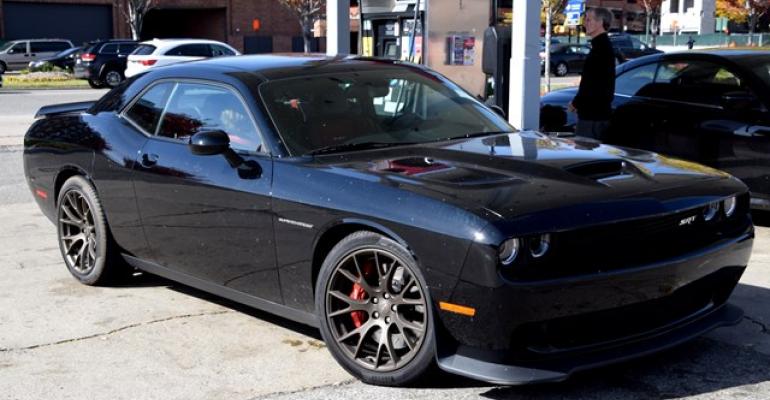 The 6.2L supercharged V-8 makes the Dodge Challenger SRT Hellcat a shockingly powerful feline that can be both demonic and docile. In this Under the Hood installment, we look at one of nearly 40 nominees in this year&rsquo;s Ward&#39;s 10 Best Engines competition.

Chrysler’s 6.2L supercharged Hemi in the Dodge Challenger SRT Hellcat is one of nearly 40 engines being evaluated as part of the 2015 Ward’s 10 Best Engines competition.

WardsAuto editors are evaluating the Hellcat V-8 in both the 2-door Challenger and 4-door Charger, although only the Challenger creeps in below the $60,000 base price cap.

These hellacious Dodges represent the most powerful cars we’ve ever tested for 10 Best Engines.

Every year, we anticipate the end of the horsepower war, and every year an automaker, generally from Detroit, keeps the muscle-car flame burning with an outlandish show of brute strength.

Honestly, the Hellcat is more docile than demonic when trotting around town. It’s perfectly content going to the grocery store or dropping the kids off at school.

The 8-speed automatic has a lot to do with this purring sensation. The Hellcat’s engine controller is programmed specifically to upshift as soon as possible. Cruising surface streets at 46 mph (74 km/h), the engine reaches eighth gear and feels downright sleepy, trundling along as low as 950 rpm – darn close to the 750-rpm idle speed.

Mind you, that idle speed is constant with the manual transmission and when the automatic transmission is in neutral. Shift the auto into drive, and the idle speed will fall to 680 rpm. The goal is to allow just enough combustion instability so the car will rumble and shake ever so slightly – in deference to carburetor-fueled muscle cars of the past.

Cat Out of Bag

But put the hammer down and this angry cat is out of the bag. The supercharger winds up with amazing speed and is nearly as loud as the engine itself. Think of the last wind tunnel demo you experienced.

Redline is 6,200 rpm, and power delivery is astounding as engine speeds rise. Everyone should experience 5,500 rpm at least once. You can do it in third gear on the freeway and still be close to the speed limit. Like Lay’s potato chips, you’ll want to do it again. Obviously, a track is necessary to fully stretch this feline’s legs – count that as a negative.

The GT500’s supercharged V-8 was impressive as well, but overall that car was more difficult to control. Even when you didn’t want to drive fast, the GT500 could get sideways just exiting your neighborhood.

On the other hand, the Challenger Hellcat is well-suited as a daily driver, largely because it’s nearly 700 lbs. (318 kg) heavier. Mass generally is the enemy, but not when 707 hp is involved.

We’ve covered exhaustively the technology wrapped into this engine, from the reinforced crankshaft and bulkheads in the block and the extra-strong alloy pistons to the bigger fuel lines, heat-treated cylinder heads and the crushed industrial diamonds necessary for the proper friction to spin the twin-screw IHI supercharger fast enough to blow 1,059 cu.-ft. (30,000 L) of air per minute into the combustion chambers.

Another cool feature is the 2-stage variable fuel pump created specifically for the Hellcat. Fuel pumps traditionally function at a fixed pressure. But in an attempt to curb consumption, the engineers designed a pump that works at two different pressures.

Most of the time, it’s in 29-psi (2-bar) mode, providing enough fuel for idle and low load. But under acceleration, particularly wide-open throttle, the pump works at a pressure of 80 psi (5.5 bar) to deliver enough fuel to quench the Hellcat’s thirst.

Despite the high-tech add-ons, ultimately this remains a pushrod engine with conventional multi-port fuel injectors (because they help with cooling and in keeping cost down). The Chevy Corvette LT1 6.2L naturally aspirated V-8 made our list last year and makes a mere 460 hp.

But the Hellcat deserves a serious look because of Chrysler’s ability to keep the base price $1,705 below our $60,000 price cap. Factor in the $1,700 gas-guzzler tax, and the Hellcat coincidentally slips under the price cap by $5 (exactly like the GT500 two years ago).

GM also has a supercharged version of its new small-block in the Corvette Z06, but it’s too expensive for our competition. So that means this year’s muscle-car war, for 10 Best Engines purposes, is between the Hellcat and the 460-hp LT1 in the base Corvette. How does the new Ford Mustang’s 2.3L EcoBoost 4-cyl. fit into this mix?

By way of comparison, most editors averaged 18 mpg (13 L/100 km) last year with the Corvette LT1. After editors have driven several hundred miles in the Hellcat this month, the trip computer reads 15.6 mpg (15 L/100 km).

If people weren’t buying them, automakers wouldn’t make them. Clearly, there’s a niche market, and halo cars are great for showroom traffic.

Chrysler did a terrific job making this car perfectly acceptable for daily driving, which begs the question: Why does a daily driver need 707 hp?

And where’s this high-output trend ultimately taking us? When automakers have to achieve a fleet average of 54.5 mpg (4.3 L/100 km) in 2025, will the Hellcat still be around, or collecting dust at the Chrysler Museum?