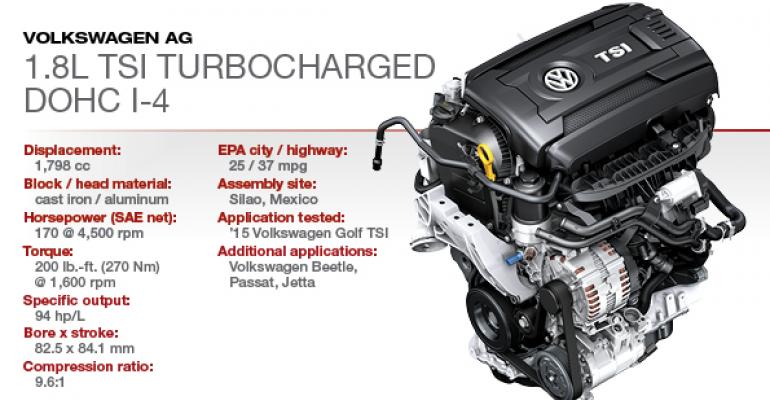 The 1.8L TSI is among the most affordable powerplants springing from the smartly crafted third-generation EA888 engine family. This accessible, delightful I-4 can be had for under $18,000 in the Golf.&nbsp;

But Volkswagen definitively demonstrates the integration of advanced technology into a brilliant and practical package need not cost a lot of money.

For evidence, we submit the all-new Volkswagen Golf with its 1.8L TSI direct-injected 4-cyl., which repeats with a Ward’s 10 Best Engines win for 2015.

At a retail level, the 1.8L is among the most affordable powerplants springing from the smartly crafted third-generation EA888 engine family, which includes high-output 2.0L versions in the VW GTI and Audi S3. We also tested those engines, and they scored well in our competition.

Built at Volkswagen’s new engine factory in Silao, Mexico, as part of a $5 billion investment in North America, the 1.8L TSI replaces the larger 2.5L I-5. The new engine has the same-size bore and shorter stroke, is lighter and uses four cylinders instead of five.

“It’s as quiet as outer space,” writes Jim Irwin on his score sheet.

“This engine is one of my favorites,” writes Steve Finlay. “Torque delivery is awesome, even in sixth gear.”

Christie Schweinsberg describes it as “remarkably vibration-free” and finds the 5-speed manual transmission a good fit. “You can spend lots of time comfortably in second gear in the city and in fourth gear on the highway.”

It’s important that every Ward’s 10 Best Engines list include at least one bread-and-butter mill capable of appealing to shoppers on a budget who may know little about the nifty cylinder head that integrates the exhaust manifold, the fancy turbocharger or the many improvements incorporated since this engine made last year’s list in the Jetta.

More torque at a lower price in a lighter car that routinely topped 33 mpg (7.1 L/100 km) in our testing? Keeping this engine on the list was a no-brainer.

The competition in this segment has grown fierce, as we tested 15 4-cyl. turbos throughout the fall. But VW’s benchmark 1.8L TSI that amazed us last year is equally impressive today.