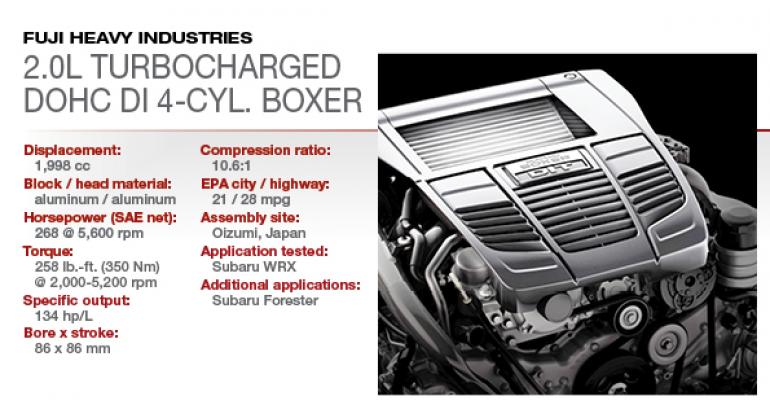 Subaru&rsquo;s 2.0L turbocharged &ldquo;FA&rdquo; H-4 in the WRX introduces an uncommon sense of immediacy to the turbo-4 experience. This fleet-footed boxer steps into the ring with fire in its eyes.

But one editor, struggling to mentally sort the 15 turbo-4s we drove for Ward’s 10 Best Engines over the past two months, rightly notes it can be hard to tell them apart.

Not true for the 2.0L turbocharged “FA” boxer 4-cyl. in the Subaru WRX, which introduces an uncommon sense of immediacy to the turbo-4 experience. The WRX’s rally-car pedigree shines through like a klieg light as the engine provides seemingly instant neck-snapping gratification at step-off. Turbo lag? Not here.

We tested this 2.0L turbo last year when it was new in the Forester CUV, but it comes back to us with an extra 18 hp in a sporty new application, which means an impressive specific output of 134 hp/L.

Compared with last year’s Forester, the WRX is 355 lbs. (161 kg) lighter and $6,500 cheaper. It sounds much more emotive, thanks to a new exhaust system that eliminates one chamber in the muffler and shortens the internal tubing. The giant scoop on the hood pulls in more air to help the intercooler do its job.

We seem to say this about a lot of honored powertrains, and it’s particularly true for the WRX: Reducing friction and curb weight while improving NVH and amping up the output is the most direct path to success. A truly holistic approach sets the stage for a great engine to do its job.

With a little work of the right foot and aggressive cycling through the 6-speed manual transmission, the FA turbo’s pleasure point is always close at hand.

The turbocharger really gets working at 2,500 rpm and pulls even harder through 4,000 rpm. At this point, a Subaru engine of the past might sound raspy and taxed. Not the new FA turbo. It seems to be enjoying the ride.

But wait, there’s more. The boxer delivers on the promise so many turbo-4s make but fail to achieve, that of ample power but equally outstanding fuel economy. Some editors registered an outstanding 28 mpg (8.4 L/100 km) while exploring the powerband.

This fleet-footed boxer steps into the ring with fire in its eyes.