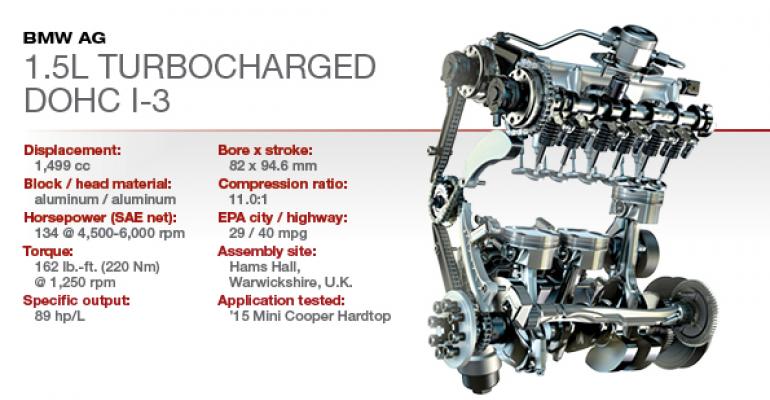 What most impressed WardsAuto editors is the small engine&rsquo;s peppy162 lb.-ft. of torque and its deep, resonant growl during acceleration, which gives it a lot of personality.

Ward’s 10 Best Engines had several big firsts this year. The first fuel-cell was one, but 2015 also marks the first time two 3-cyl. engines make the list.

Historically, 3-cyl. engines were something you were forced to drive by economic necessity, not something you actually wanted under the hood. However, we’re now seeing a new generation of small boosted 3-cyl. mills that still are base engines, but are incredibly powerful for their size, tout lots of advanced technology and are a lot of fun to drive.

The B38 offers the same features as BMW engines on much more expensive vehicles, such as the latest-generation gasoline direct-injection system and Valvetronic variable valve control.

And this engine is destined for wide use in BMW-brand cars such as the 218i Coupe in markets outside the U.S.

It also is a major improvement over its 4-cyl. predecessor, the very competent 1.6L Prince engine, which BMW jointly developed with PSA Peugeot Citroen. The entry-level Mini’s torque increases by 42%, and 0-60 mph (97 km/h) acceleration is chopped by 2.3 seconds compared with the Prince. Fuel efficiency increases as much as 8%.

What most impresses WardsAuto editors is the small engine’s peppy 162 lb.-ft. (220 Nm) of torque and its deep, resonant growl during acceleration, which gives it a lot of personality. In some ways it sounds similar to BMW’s iconic 3.0L I-6, in part because it is essentially that engine split in half.

BMW says the sound frequency of a 3-cyl. engine increases 50% faster than that of a 4-cyl., and that gives the engine its sporty, more emotional exhaust note. Some call it “vivacious.”

One editor says he couldn’t imagine driving a Mini with any other engine. As the number of very good 2.0L 4-cyl. turbos continues to grow, the 3-pots clearly are starting to stand out. “With a starting price just under $21,000, the Mini Cooper Hardtop with the 3-cyl. engine is the smart choice,” says WardsAuto editor Tom Murphy.

In the world of motorcycles, “triples” are beloved for their compactness, efficiency and distinct exhaust note. It’s very possible a new generation of automotive 3-cyl. engines may develop a similar following for exactly the same reasons.