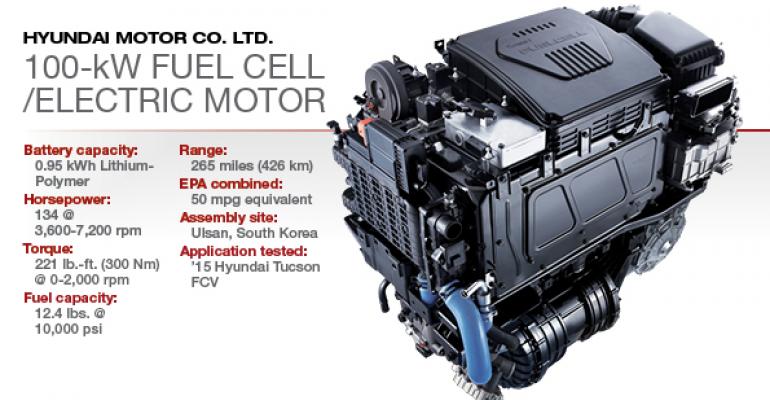 The importance of infrastructure was vigorously debated by WardsAuto editors before accepting the vehicle for testing. We decided every important new technology does not start with a supporting infrastructure in place.

WardsAuto editors have been test-driving fuel-cell vehicles for about 15 years, and the technology has been improving by leaps and bounds in terms of cost, packaging and range.

Even so, the science-project-like nature of FCVs had us wondering if we’d ever live to see the day one would make the Ward’s 10 Best Engines list.

Hyundai answered that question this year with the perfectly executed Tucson Fuel Cell, a stunning example of how to make the most advanced automotive technology practical and consumer-friendly.

Operating the vehicle is simple and unintimidating. All jurors commented on their score sheets about how quiet the powertrain is, even by electric-car standards.

There are no gurgling noises or fans whirring in the background like we’re used to hearing in FCVs. Numerous blowers, compressors and pumps are involved in the fuel- and air-processing and thermal-management systems, but you do not hear them.

Power delivery is so smooth we found ourselves creeping past 80 mph (129 km/h) on the expressway without noticing. Because it has 221 lb.-ft. (300 Nm) of torque beginning at 1,000 rpm, the propulsion system provides ample power to motivate the 4,101-lb. (1,860-kg) CUV. With only 134 hp, we’d like to see more power for passing and freeway entrance ramps, but all-in-all the Tucson FCV is a delight to drive.

And the engine bay looks like most others, even though the fuel-cell stack residing inside turning hydrogen and oxygen into electricity is technology more closely associated with a spaceship than an automobile.

Amazingly, there is nothing about the CUV that suggests anything unusual, except that it has extraordinary capabilities for an EV. For one, the Tucson FCV is quite large, capable of hauling five people and cargo around in comfort. It has a range of 265 miles (426 km), triple that of all the BEVs that fit under our $60,000 price cap. The Hyundai FCV currently can be leased for 36 months in California for $499 a month with a $3,000 down-payment. Refueling is free.

Most importantly, it can be completely refueled in about three minutes. The fastest commercial BEV charging technology, Tesla’s Supercharger, takes 20 minutes to add about 130 miles of range and 75 minutes to fully charge a $100,000 Model S with the largest battery pack and 265 miles of range. The BEVs we tested this year took a minimum of three to four hours to charge fully with a 240V system, and some could only hold about a 60% charge when the weather turned frigid.

The ability to be fueled quickly and provide close to 300 miles (483 km) of zero-emissions range – issues EVs are struggling with – are big reasons FCVs are making a comeback.

Hyundai is first to enter the marketplace with a new-generation vehicle in California, but Toyota will offer its Mirai FCV for sale in 2015 and Honda will offer an FCV in 2016, followed by General Motors and others. Analysts believe most automakers eventually will offer FCVs so they can achieve enough credits to satisfy California’s demanding zero-emissions mandate.

The importance of infrastructure, now very meager, was vigorously debated by WardsAuto editors before accepting the vehicle for testing. There currently are nine public hydrogen refueling stations in California with 19 in development. The state projects 100 will be built in the next decade; New York is planning to build 100 stations by 2020.

Hyundai made our evaluation possible in Michigan by delivering our test vehicle fully fueled on a trailer. After we used up one tankful, which delivered the promised range, Hyundai picked it up and refueled it at the Hyundai America Technical Center in nearby Superior Township.

Whether FCVs ultimately become mainstream or not, the Hyundai Tucson Fuel Cell deserves to be recognized as a great engineering achievement and a giant leap for zero-emissions vehicles.