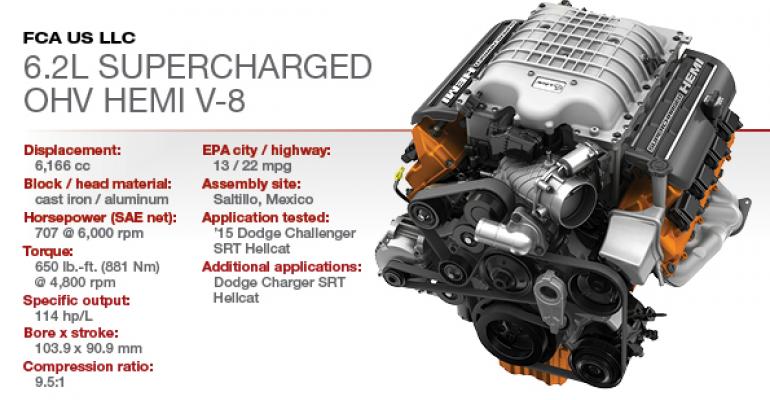 Exploring the Hellcat&rsquo;s expansive powerband is nothing short of transformative. Getting out of the car afterward, one might resemble Moses coming down from Mount Sinai with a glowing aura after conversing with God.

Does the world need a Hellcat?

Absolutely, in the same way the world needs saxophone solos, trips to the beach, high-speed Internet and major-league baseball.

They may seem trivial relative to sunlight, water, food and a roof over one’s head, but these seemingly random things define our culture. They get us out of bed in the morning.

How do we know? Because there’s no easier way to be treated like a rock star than to cruise down Woodward in suburban Detroit in a Dodge Challenger SRT Hellcat on a warm summer night with the windows open, responding to every 20-something gearhead who wants to know exactly what it’s like driving a Hellcat.

This magnificently decadent 6.2L supercharged Hemi V-8 earns a spot on the 2015 Ward’s 10 Best Engines list for reigniting muscle-car passion while, at the same time, pulling double duty as a perfectly sedate daily driver that saw 16 mpg (14.7 L/100 km) in our testing.

This engine’s powerband is so wide, it really only needs a few of the eight forward gears in the ZF-supplied TorqueFlite automatic transmission to propel this sizable coupe.

But cycling through each gear and running it to the redline, assuming one has the genital fortitude or access to a racetrack, is nothing short of transformative. Getting out of the car afterward, one might resemble Moses coming down from Mount Sinai with a glowing aura after conversing with God.

It wasn’t a tough decision for seven of eight Ward’s 10 Best Engines judges – the eighth thought the Challenger SRT Hellcat was ridiculous.

The rest of us could see through the smoky rubber rising from the asphalt in realizing an engine and vehicle package like this comes along maybe once in a generation. We’ve picked other high-output engines in the past in vehicles that were less driver-friendly.

One might consider a cam-in-block architecture to be outdated, but General Motors has breathed new life into it with the all-new small-block engine family. Likewise, Chrysler has significantly updated the Hemi to shoulder a massive IHI supercharger and to withstand the prodigious churn of a reinforced crankshaft and extra-strong alloy pistons.

“This is silly power. Love it! Wish I could have used half of it,” writes WardsAuto editor Dave Zoia on his score sheet. “It has a nice exhaust note, with just the right amount of shake. It’s the best performance car engine we’ve seen in years.”

The Challenger SRT is the second Ward’s 10 Best Engines winner to face a gas-guzzler tax, behind the Audi S4 Avant 4.2L V-8 a decade ago. That tariff has been a kiss of death for many high-output entries over the years.

But the Hellcat is so worth that $1,700 penance. If one were sentenced to eternal damnation, there’s no finer way to get there than in the Hellcat, running into the abyss at wide-open throttle while the helpless soul hangs on for dear life.

Satan personally will open the gates and grab the keys when it arrives.