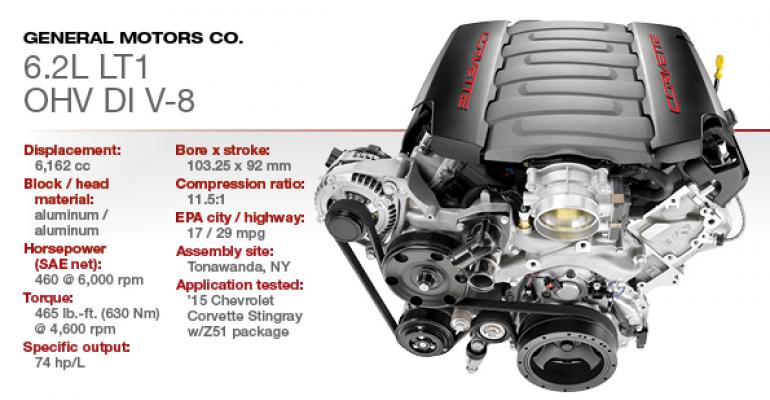 Whereas the Hellcat Hemi V-8 is a Braveheart mallet to the face, the 460-hp &rsquo;Vette powerplant is a black-ops sniper with a clear shot in daylight. Other naturally aspirated small-blocks will outsell the LT1, but they will never outperform it.

It’s no small feat to have two V-8s among the 2015 Ward’s 10 Best Engines. Of 36 powertrains tested, only three employ eight pistons.

Automakers aren’t investing heavily in new V-8 engine programs, instead focusing their resources on downsizing and potent 6-cyl. engines with forced induction to do similar work.

But General Motors powertrain engineers know there’s no replacement for displacement, and that the seventh-generation Chevrolet Corvette that launched more than a year ago needed some small-block magic.

They pulled a rabbit from their hat in the form of a cam-in-block 6.2L naturally aspirated V-8 that purrs at idle, spins smoothly in casual driving as if it’s barely working and breathes fire down the stretch.

The second V-8 to make the list was the Dodge Challenger SRT Hellcat’s outrageously supercharged 707-hp moonshot of an engine, and the staff contemplated whether two low-volume muscle-car drivetrains needed to be honored the same year we evaluated four electric vehicles, two hybrids and a hydrogen-powered fuel cell, not to mention 18 4-cyl. engines.

Ultimately, there was no debate over the political correctness of these two pushrodders: They both got the nod, for different reasons.

In Cold War terms, the Corvette’s LT1 all-aluminum, direct-injected V-8 would be considered a nuclear deterrent. Whereas the Hellcat Hemi V-8 is a Braveheart mallet to the face, the 460-hp ’Vette powerplant is a black-ops sniper with a clear shot in daylight.

If it’s drama you want, it can be dialed up. Combine a lightweight aluminum frame, magnesium and aluminum suspension bits and fiberglass body panels, and the power-to-weight ratio is enviable: 1 hp for every 7.25 lbs. (3.3 kg) of mass, actually better than a Porsche 911. Agility is the Corvette’s calling card.

With variable valve timing and Active Fuel Management, which allows the LT1 to run in 4-cyl. mode during light load, the Corvette might fool you as a fuel sipper.

Yes, the small-block lives on, with its 90-degree layout and surprisingly compact packaging, and GM deserves credit for sticking with a massive re-engineering of the legendary engine family throughout the bankruptcy churn of 2009.

These other engines were new last year and surely will outsell the LT1, but they will never outperform it.