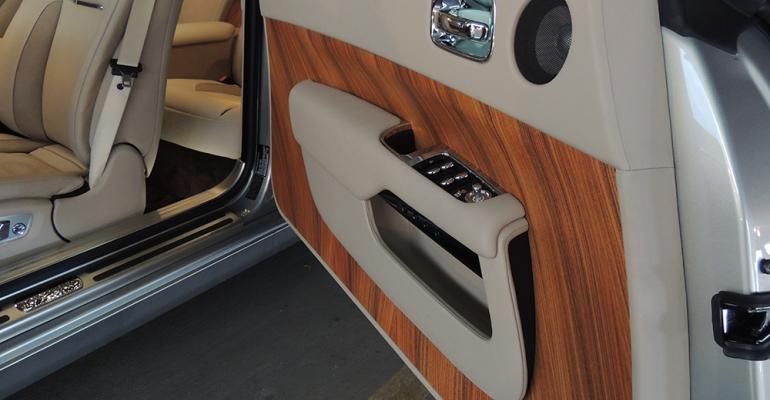 The latest installment in our series on 2014 Ward&rsquo;s 10 Best Interiors features the Rolls-Royce Wraith, a car for discriminating buyers and Powerball jackpot winners. There&rsquo;s no price cap for our competition, and it costs nothing to dream.

Yeah, we know, a car with a 6-figure window sticker should have a fabulous interior, and a land yacht priced at $372,800 should stir our proletarian hackles.

WardsAuto editors are a frugal bunch. Our own personal cars are simple and sensible, with an average age of 10 years, and no editor here ever spent more than $30,000 on a car. One editor’s 20-year-old beater occasionally leaves piles of rusty sediment in the parking deck on windy days.

So we were sure the outlandish Rolls-Royce Wraith would crumble in the “value” scoring category and fall from contention like every other vehicle priced above $100,000 in the past. (There were seven, from Fisker, Jaguar, Mercedes, Porsche and Chrysler's SRT brand).

Yes, it took four years of Ward’s 10 Best Interiors testing to find a cabin in a 6-figure car we deemed worthy.

The new Mercedes S-Class is one, and the other is the Wraith, whose interior (as well as the dramatic exterior) softens the Rolls-Royce brand image while tantalizing occupants with monogrammed head restraints, lambswool floormats and frosted buttons on the dashboard that appear as if carved from Waterford crystal.

If a Rolls-Royce in the past had been perceived as unapproachable and aloof, the fastback Wraith – inside and out – is warm, inviting and oh, so seductive.

Little things make big impressions, such as the three angelic strums of a harp that greet the driver at startup; the substantial feel of the chrome organ-pull levers that open and close air vents, the Teflon-coated umbrellas hidden neatly in the door jambs; and the climate-control fan settings of “Soft,” “Med” and “High” in place of mere numerals.

Bigger things dazzle, too, such as the enormous carriage-style doors that close with the push of a button; the stunning matte-finish rosewood paneling canted at 55 degrees; the unforgettable glow of 1,340 fiber-optic lights stitched by hand into the leather headliner to imitate a starry sky; and the two types of sumptuous leather (Oatmeal and Dark Spice) that swaddle the interior.

And those are not conventional A- or B- or C-pillars. Instead, the roof is supported by one structural element, drawn like a hunter’s bow and wrapped in the finest leather available.

Anyone lucky enough to climb into a Wraith will focus on a particular feature, but all will note the rejuvenating tranquility of just sitting at a stoplight while 12 pistons purr confidently in near silence. It must be like sitting in one of the cash-filled bank vaults belonging to a Wraith owner, with the door closed.

We recognize our Wraith tester lacks features now available on mainstream vehicles, such as a heated steering wheel and massaging seats.

But the Wraith is something high-volume cars will never be again: hand-built. It takes several weeks to assemble one – to craft and finish the wood, cut the leather, sew the seats – to a customer’s exact specification.

Like Bentley, Rolls celebrates the old way of manufacturing cars, allowing for modern technology where appropriate. Make the time to visit Goodwood someday to see how it’s done.

Is price an object? Of course it is, except for the one-tenth of one-tenth of the wealthiest 1 percent. Most of us will never know how this rare breed thinks, shops and spends.

But there is no price cap for Ward’s 10 Best Interiors, and it costs nothing to dream.