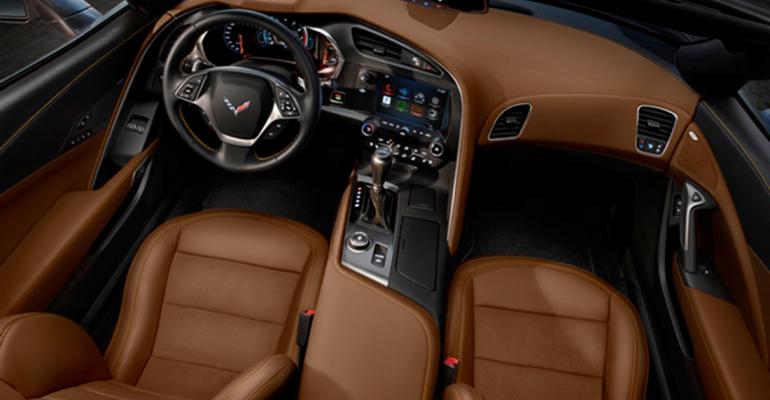 The latest installment in our series on 2014 Ward&rsquo;s 10 Best Interiors winners takes a look at how the Chevy Corvette Stingray ups its game to challenge the segment&rsquo;s big-ticket rivals.

Long known for commanding the best bang-for-the-buck in the sports-car segment, but also associated with a comparatively low-rent interior, the redesigned Chevrolet Corvette now boasts the sportiest and most high-tech cabin in its 61 years of production.

That combination, as well as sustained affordability with a base price of $53,800, earns the seventh-generation’14 Corvette Stingray a 2014 Ward’s 10 Best Interiors award, the first for the legendary 2-seater.

“GM did a bang-up job with the C7, addressing all of the Corvette’s previous shortcomings,” offers one WardsAuto judge.

Another judge notes: “This interior makes the Corvette more upscale and more drivable without taking anything away.”

Gone from the new Corvette is a steering wheel borrowed off another General Motors passenger car, replaced by a smaller-diameter, leather stitched one with grip holds and enough redundant controls so the driver rarely needs to take his eyes off the road.

The seats are remarkably better, too, dropping weight while improving comfort, rigidity and styling.

But far and away, the car’s reconfigurable digital instrument cluster and central display, which communicate mission-critical information to the driver on and off the track, seals a win for the Stingray in this year’s competition.

The cluster matches driver modes of Tour, Eco and Weather and provides expected data such as trip information, fuel economy, audio and navigation. But switching to Sport adds classic sports-car readouts, while Track mode provides a gauge design based on the Corvette C6.R race car and includes a lap timer.

The various displays bathe the cabin in light, brightening a cockpit that previously felt drab and predictable.

The interior later this year will add a Performance Data Recorder, so owners can shoot video of hot laps at the track or their favorite stretch of roadway. In park, the footage can be viewed immediately on the car’s 8-in. (20-cm) touchscreen, and system upgrades will unlock a treasure of performance-driving information.

All those goodies combine to vault the Corvette Stingray’s interior among the segment’s leaders, the Porsche 911 and Jaguar F-Type, at a fraction of the cost.