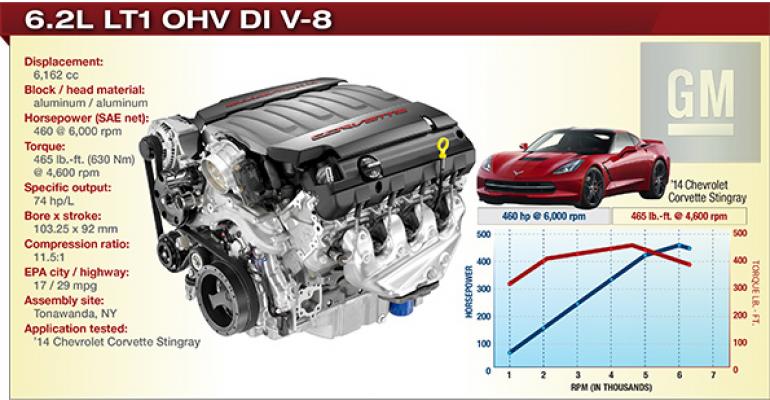 Nine years ago, when he was group vice president of global powertrain at General Motors, Tom Stephens was so disappointed the Chevrolet Corvette small-block V-8 had been passed over for the Ward’s 10 Best Engines list that he dressed down a WardsAuto editor while seated next to him on a plane.

It was a very long flight.

It’s ironic the fifth-generation LT1 6.2L small-block that turns the all-new ’14 Chevrolet Corvette Stingray into an absolute raging bull cruised so casually this year to a Ward’s 10 Best Engines win.

Barely a word was said about it in the often-contentious editorial confab. The votes had been counted and no one questioned the LT1’s position high in the rankings.

The discussion wasn’t whether the all-new small-block belongs on the list, but which one. GM has been busy launching vehicles with four engines springing from this family, and they all share certain core elements, such as direct injection, two valves per cylinder, aluminum blocks, 92-mm stroke and cylinder deactivation.

The 420-hp L86 V-8 caps the range on the truck side, appearing in the premium GMC Sierra Denali and Chevrolet Silverado High Country. All the truck engines are branded EcoTec3.

The L86 has a lot in common with the LT1: displacement, block, bore and stroke, 11.5:1 compression ratio, cylinder heads, crankshafts, continuously variable valve timing and other hardware.

But the LT1 requires unique intake, exhaust and lubrication systems and tuning to meet the demands of a Corvette owner.

WardsAuto editors unanimously rave about the drive experience in the Corvette, saying the LT1 makes this seventh-generation coupe “the best ’Vette yet” and an “instant classic,” with a “silky smoothness” and an exhaust note that resembles “a sip of 15-year-old single-malt.”

We liked all the small-blocks, but observed fuel economy made our decision easier. True, the 4.3L V-6 delivered the best efficiency – about 18 mpg (13 L/100 km) for most editors – but it whined a bit when pressed hard and lacked sharp throttle response.

The bigger and more powerful the engine, the more often it runs in fuel-saving 4-cyl. mode. The Corvette, despite being thrashed repeatedly, returned better fuel economy because it is about 2,000 lbs. (907 kg) lighter than the Sierra Denali.

Editor Drew Winter writes on his Corvette score sheet: “If we are going to have a fire-breathing V-8 on the list this year, this should be it, not just because it is a beast but because it is a very fuel-efficient beast.”

Meanwhile, the editor will never forget the verbal drubbing he took while seated next to Tom Stephens.

“I felt like Mike Tyson had bitten my ear,” the editor says.