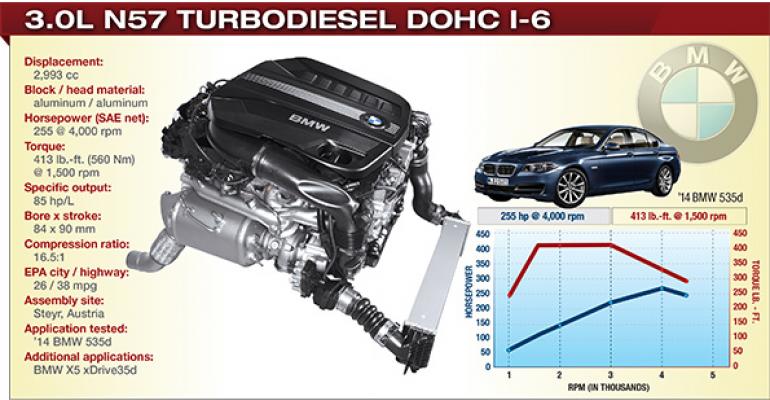 On a long road trip, we&rsquo;re convinced 40 mpg (5.8 L/100 km) is within reach in this spacious luxury cruiser with its 8-speed automatic transmission, because diesels, unlike gasoline engines, routinely outperform their stated mileage estimates.

Engines evolving from one generation to the next tend to improve in several ways, generally with more horsepower, a fatter torque curve and the newest technology.

Oddly enough, BMW goes in the opposite direction and still arrives at a winning formula.

This new TwinPower Turbo 3.0L diesel inline-6 (codename N57) in the 535d sedan now uses a single variable-geometry turbocharger in place of two separate turbos on board the earlier version that won Ward’s 10 Best Engines trophies in 2009 and 2010.

The previous diesel also used the latest fast-acting piezo-electric fuel injectors, while the new one makes do with less sophisticated coil-based solenoid-valve sprayers that are less expensive but still can deliver six separate injections per combustion stroke. More injections make for a quieter diesel.

The earlier version made an extra 10 hp and 12 more lb.-ft. (16 Nm) of torque. Scaling back on output would seem counterintuitive, but the fuel-economy gain is completely justified.

That’s better than some 4-cyl. diesels we evaluated and beats a lot of luxury gasoline-electric hybrids, while being much more satisfying to drive.

On a long road trip, we’re convinced 40 mpg (5.8 L/100 km) is within reach in this spacious luxury cruiser with its 8-speed automatic transmission because diesels, unlike gasoline engines, routinely outperform their stated mileage estimates.

Hence our affinity for diesels.

Better yet, no one in our office missed the extra horsepower or torque from a few years ago. On their score sheets, editors refer to the 3.0L in the 535d as “remarkable,” “stealthy fast,” “responsive without being twitchy” and “a blast to drive.”

On the noise, vibration harshness front, all new diesels – we tested six of them – are less disruptive, particularly at running speeds, than those from years ago, thanks to high-pressure common-rail fuel injection.

Some of the new diesels still project a slight clatter at idle. Not so for the 535d. Arguably, it’s the all-around quietest diesel we’ve ever driven.

Bolstering the N57’s fuel economy is a stop/start system redesigned to function more smoothly. A number of consumers, not only in the U.S. but also in Europe, have complained BMW’s stop/start system was too clunky. Owners would shut off the system, nullifying any efficiency gains. The problems were even more pronounced in diesel engines.

BMW’s solution, being applied now throughout the vehicle lineup, is to close the throttle valve when the engine is stopping. In addition, new engine mounts are being used, and the engine controller has been reprogrammed to identify the ideal timing position to stop the engine at a time when it will be less sensitive to vibrations.

BMW also uses a new starter with a friction clutch allowing the engine to restart even when the crankshaft hasn’t come to a complete stop. With the past system, the crankshaft had to stop fully before the engine could restart. So now, a driver who is slowing down but changes his mind and begins to speed up is less likely to experience that jarring sensation.

Another fuel-saving technology is Brake Energy Regeneration, which enables the alternator to feed electricity into the battery when the driver takes a foot off the accelerator. It’s a smart way to generate electricity without consuming fuel.

The BMW 535d can be sold in all 50 states, thanks to its advanced urea-based selective catalytic reduction system to mitigate oxides of nitrogen emissions.

A BMW executive says all these advanced technologies amount to “a chemistry factory within the car.”

Yes, perhaps it’s time to retire the term “oil burner,” which dates back at least 50 years, when farmers routinely ran diesel tractors on all sorts of oils, even from sunflowers.