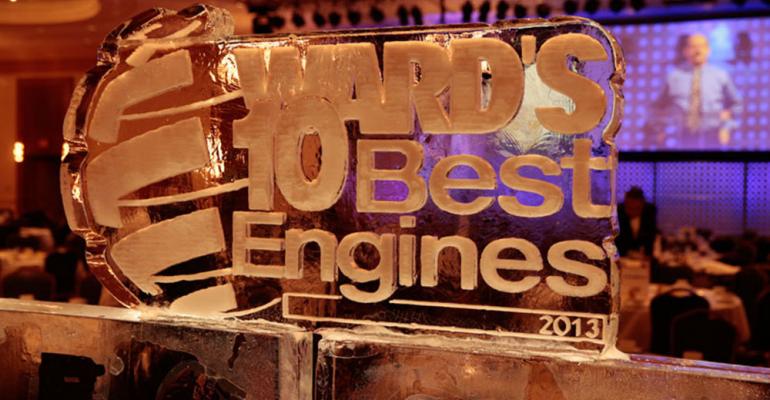 The Ward&rsquo;s 10 Best Engines competition is in its 20th year. We mark the occasion by recalling those that are hard to forget.

Pardon the butchering of the English language, but these four words summarize our favorite Ward’s 10 Best Engines winners over the past 20 years.

We’ve been recognizing powertrain excellence for two decades and decided another rankings list would be a great way to highlight some of the remarkable engines that have crossed our path.

Each WardsAuto editor was asked for his or her five most memorable picks since joining the staff and to rank the selections.

With the votes tabulated and zero discussion among the staff, here are our picks, in alphabetical order:

A few takeaways worth noting: No diesels make the cut, but the electrics are well-represented, with one battery EV, one hybrid and one extended-range EV.

Two engines from the 2014 class of honorees make the grade: Audi’s remarkable 3.0L supercharged V-6 (a 5-time winner) and the Fiat 500e, a first-timer this year.

Oh sure, some of you are wondering how a battery-electric like the 500e makes the grade, especially when it has no internal-combustion engine at all. But don’t knock it until you try it.

Note also that only one V-8 earns a shout-out, Chrysler’s 5.7L Hemi, which continues to stoke our fires after winning six trophies over the course of seven years, ending in 2009.

Narrowly missing the top 10 was Ford’s 5.4L Triton V-8, which strung together six consecutive wins through 2002, including a supercharged variant in the Ford SVT Lightning pickup.

For the record, Ford has won the most Ward’s 10 Best Engines trophies for V-8s, taking home 17 over the past 20 years, compared with nine for GM and seven for Chrysler. 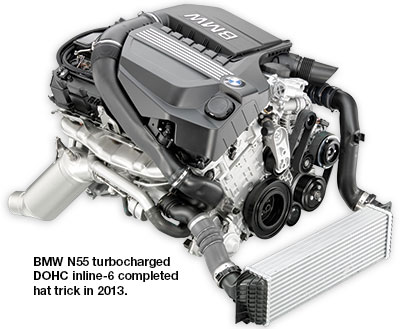 Still, we give the edge to the Hemi push-rodder because Chrysler improved it a number of times, for instance, by integrating fuel-saving cylinder deactivation, something Ford wasn’t able to do with its overhead-cam architecture.

WardsAuto editors have fond memories of the affordable and darty Contour SVT, its 195 hp partially enabled by the unique Extrude Hone intake manifold whose runners were smoothed by high-pressure abrasive putty.

Longtime watchers of our competition may remember our infatuation with BMW’s “M” I-6, a later version of which employed six individual throttle butterflies that helped the old M3 deliver 333 hp from the 3.2L.

Between 1995 and 2004, the engine won nine trophies. The naturally aspirated 3.0L/3.2L narrowly missed the cut in our recent rankings partially because it was such a niche application while the newer N55 powers much of the brand’s lineup.

By the way, our favorites list of the past 20 years would be incomplete without a Bimmer: The Bavarians have more Ward’s 10 Best Engines trophies (30) than any automaker in the world.

One would have thought the sky was falling when WardsAuto editors picked the first-generation Toyota Prius powertrain in 2001. Until then, every engine on the list was powered solely by gasoline, except for one, the Volkswagen Passat TDI (1997 winner).

Expanding the competition to incorporate vehicles with electrified drivetrains bordered on heresy among critics.

But the editorial staff stood its ground and decided every powertrain would get an equal shake. If it turns the wheels, we’ll cop a feel.

The rules were the same when the Chevrolet Volt made our list in 2011, impressing us with 35 miles (56 km) of all-electric range before a 1.4L gasoline engine kicked in to generate enough juice to drive another 330 miles (531 km).

The Volt promised to make range anxiety a thing of the past. 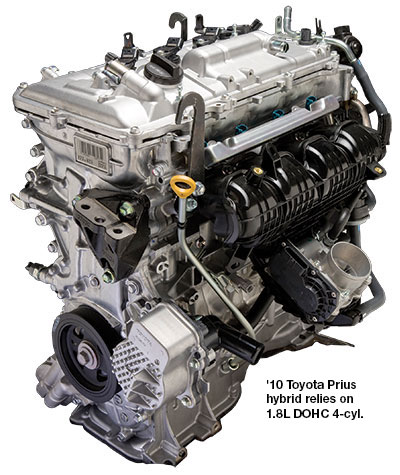 for long weekends and holidays.

“It was just a great engine in a great car with an ideal power-to-weight ratio,” Pope recalls. “I loved driving it.”

The two remaining engines earning recognition among our 10 faves from the past 20 years extend to the earliest days of our competition.

In fact, it has been said on more than one occasion that Honda’s 2.2L VTEC 4-cyl. in the Prelude and Nissan’s 3.0L VQ V-6 in the Maxima motivated former editor Bill Visnic to suggest a competition dedicated to engines.

“It was hands-down the industry’s best 4-cyl. engine,” he says. “It was high-revving, responsive off the line and super smooth. And it was inexpensive, in a mainstream car.”

Another engine that felt as if it ran friction-free was Nissan’s masterful VQ, which holds the record with 14 consecutive Ward’s 10 Best Engines wins, from 1995 to 2008.

The Maxima was and remains a spacious 4-door, and the VQ helped establish the segment for front-wheel-drive sport sedans.

The 3.0L VQ expanded displacement to 3.5L and then 3.7L, and much of the original all-aluminum, DOHC, power-dense DNA lives on in VQ engines throughout the Nissan and Infiniti portfolios.

It is highly doubtful another engine will ever rack up 14 consecutive wins. Change comes much more quickly now in the powertrain world, and newer engines often have an advantage. For 20 years, the Ward’s 10 Best Engines list has served as a resource for tech-savvy consumers shopping for the best value and performance.

That includes WardsAuto editors, who have purchased Audis, Chevrolets, Chryslers, Fords, Mercedes, Minis and Nissans with engines that have been on the list.