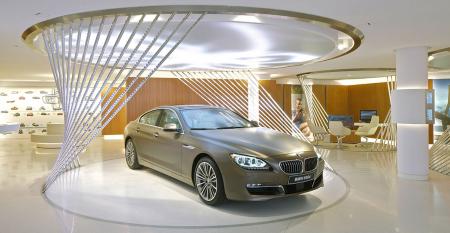 Automakers Push for Showroom Overhauls, and Dealers May Reap Rewards
Jan 30, 2014
OEs are pressing for more than brick-and-mortar changes and modern décor. They want showroom culture to evolve as well, and...

Clinton Dodges Controversy, Gets Warm Reception at NADA
Jan 27, 2014
The former Secretary of State remains unsure about a 2016 presidential bid. “Let’s solve the...

New NADA Chairman Gets A in Public Speaking
Jan 27, 2014
Forrest McConnell III is as animated as the videos that are interspersed throughout his inaugural speech.

Church Bad Boy Becomes Dealer of the Year
Jan 27, 2014
Jeff Teague of Arkansas is selected among 56 nominees for an annual award presented by Time magazine and Ally Financial.

Bosch Pitches Fast-Track Vehicle Inspection System
Jan 26, 2014
The scalable system, which bases at $6,400 and rises to about $50,000 with all the bells and whistles, allows dealers to supply...

Industry Should Lease More, Not Less, Manheim Economist Says
Jan 26, 2014
Experian Automotive says leasing accounted for 23.7% of new-vehicles sold last year and 28.3% of all purchases made other than...

Steve Forbes Hits All the Right Notes in Talk to Dealers
Jan 26, 2014
The one-time presidential candidate predicts a rollback in CAFE ratings, slams the Consumer Financial Protection Bureau and calls for simpler income taxes and a free-market approach to health care as ways to boost the economy.