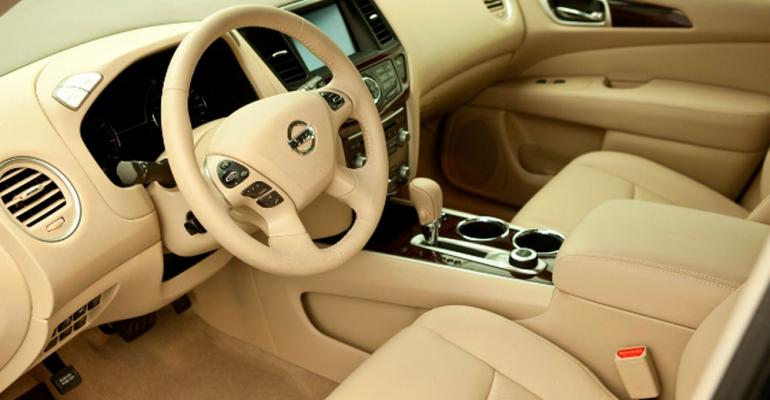 It&rsquo;s been a long journey to refinement for a vehicle that started out as a clunky SUV.

The Nissan Pathfinder dropped some weight, redefined itself and went to finishing school, as evidenced by the striking interior of the all-new ’13 model.

The Pathfinder debuted about 25 years ago as a rather brutish body-on-frame SUV. Back then, it had an interior to match its rough ways.

But Nissan has converted the Pathfinder into a cross/utility vehicle built on a unibody, car-like platform. As part of that switch, the auto maker’s designers went to work creating an interior more befitting of CUV buyers attracted to style, connectivity and creature comforts.

The results are dramatic. The Pathfinder interior has gone from cramped and clunky to flowing and refined. The transformation earns the vehicle a 2013 Ward’s 10 Best Interiors win.

The new Pathfinder shows what’s inside counts. The interior is spacious yet intimate, efficient yet aesthetic, functional yet artful.

Standouts include a well-designed center-stack console that maximizes use of that prime real estate.

The interior is exquisitely crafted with premium wood, sumptuous leather and splashes of brushed aluminum trim.

On a practical level, Nissan’s Latch-and-Glide system is a clever way to provide easier access to third-row seats.To accomplish that, the back and bottom of the second-row seats fold like a clam shell, making it easier to slide forward. In the upright position, the second row can slide up to give third-row occupants more legroom.

“Big points for the sliding row and for making access to the third row easier,” says one editor, the father of three young children.

Another evaluator says, “If my four sons were still at home, I could see owning this vehicle. Really well done.”

WardsAutotesters also give high marks for user-friendly information systems, a 4-star safety rating and even the floor mats made of high-grade Berber carpeting.

“It’s hard to find anything wrong with this interior,” says one tester.

The new Pathfinder has found its way to interior success.