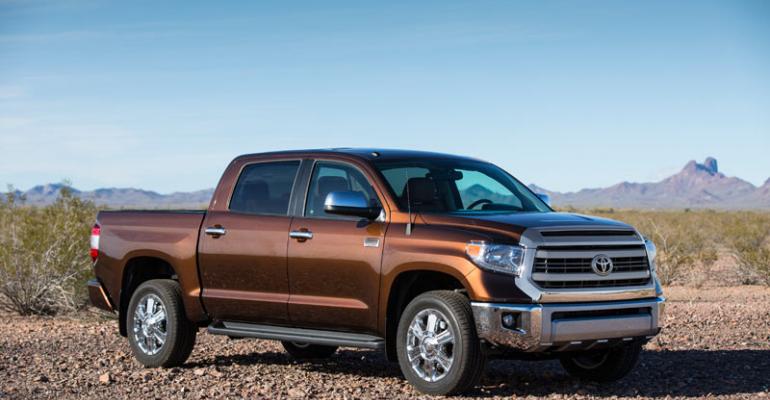 A more &ldquo;chiseled&rdquo; exterior, and interior looks that are unique to each grade, including the new 1794 Edition premium model, are featured on the refreshed pickup.

On sale in September, the Tundra receives new exterior and interior looks for the model year, but its three engines, which debuted in 2007, carry over.

Toyota calls it the first major change since the launch of the current-generation Tundra in 2007, suggesting this is a refresh, with a full redesign still to come.

Like the model that debuted six years ago, the new Tundra was engineered at Toyota’s technical center in Ann Arbor, MI, and designed at its Calty studios in Ann Arbor and Newport Beach, CA.

Toyota drew from its customers in crafting the ’14 Tundra, says Toyota Div. group Vice President Bill Fay. The truck’s new exterior and interior were the direct result of customers wanting a “more chiseled” exterior and “refined” interior with better ergonomics for drivers, he says.

Each of the ’14 Tundra’s five grades, the SR, SR5, Limited and premium Platinum and new 1794 Edition – have unique appearances inside and out, Toyota says.

All of the trucks have a new face integrating a taller chrome grille with the hood for a “modern industrial image,” the auto maker says. The front fascia is larger and character lines are tighter than those on the ’13 model, to emphasize the Tundra’s wide stance.

The front bumper trades its 1-piece for a 3-piece design, which presents a different look for each grade and reduces the cost of replacement parts; fenders and wheel wells now are squared off.

The Tundra’s bed is redesigned, as is the tailgate, which now has an integrated spoiler and the word ‘Tundra’ stamped into the sheet metal. The rear bumper also is a 3-piece design compared with one piece in the outgoing model.

The interior of the ’14 Tundra shows the most variation between grades. The SR5 is done in a “professional gear” theme, which includes unique zones for the driver and passengers, metallic accents and fabrics with contrasting colors.

Platinum-grade Tundras use perforated black leather-trimmed seats to differentiate from the other grades. Double-stitched diamond plate leather covers door and instrument-panel inserts, and chrome is used as an accent for an “upscale yet urban feel,” the auto maker says.

The new 1794 Edition Tundra is named for the year the San Antonio ranch on which the pickup’s assembly plant is sited was established. The grade has a Western-theme interior, complete with saddle-brown embossed leather, ultra-suede accents and plentiful soft-touch material, including on the shift console.

The various grades come standard with different levels of technology. The Limited has heating, ventilation and air-conditioning controls. Platinum Tundras receive a 12-speaker JBL sound system with Toyota’s Entune infotainment system, plus navigation and heated and ventilated front seats. The Platinum’s features also are standard on the 1794 Edition Tundra.

Toyota enhances the Tundra’s ride and handling for ’14, with re-tuned shock-absorber valving to soften the ride over rough surfaces, and a re-tuned steering system to reduce inputs needed to correct for road variations and imperfections.

Rear taillamp lenses and exterior mirror bases get patented aero fins to reduce air turbulence along the Tundra’s sides. Noise, vibration and harshness inside the pickup truck’s cabin is reduced thanks to an upgraded design of engine-compartment NVH treatments, Toyota says.

The maximum tow rating for the Tundra remains 10,400 lbs. (4,717 kg) for V-8 trucks in the 4x2 Regular Cab configuration with an optional tow package.

Toyota says segment-first safety technology, a standard backup camera and blind-spot monitor with rear-cross-traffic alert for Platinum and 1794 Edition grades, is added to the ’14 Tundra.

Sales of the current-generation Tundra reached their pinnacle in 2007, with 196,555 units, WardsAuto data shows, but have fallen steeply in recent years.

Toyota has said the global recession, which hampered the construction industry in the U.S. and eliminated casual pickup buyers, took the wind out of the Tundra’s momentum. Deliveries tumbled to 79,385 in 2009, but last year tallied 101,621.

The refreshed Tundra will have hefty competition in its segment this year and next. General Motors is debuting the next-generation Chevrolet Silverado and GMC Sierra large pickups this year. Ford and Nissan both have slated new versions of their respective F-Series and Titan models for 2014.

The Dodge Ram was refreshed last year with a new interior and new powertrains.