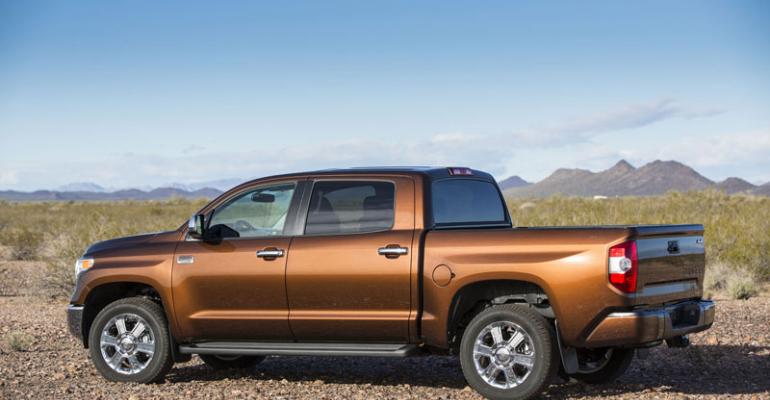 The auto maker&#39;s heavily refreshed large pickup truck should help 2014 sales bounce back to levels not seen since 2008.

"This year, we'll probably grow a little bit as the segment grows, but we're probably not going to start building (the refreshed '14 model) until the fall, and by the time we get it distributed its full impact really won't be until next year," Fay says in an interview.

While a full revision of the Tundra is more than a year away, Fay says Toyota wanted to revitalize its large pickup given all the activity in the segment, which includes new generations of the Chevrolet Silverado and GMC Sierra this year and an all-new Ford F-Series next year.

Many of the changes to the Tundra are cosmetic, prompted by owner feedback for a more aggressive exterior look and a more refined, higher-quality interior.

The largest Tundra mill has been highly reliable over its lifecycle, and its performance and fuel economy favorably compare with smaller V-8s or turbocharged V-6s, which are the going trend in the segment, Fay says.

Carrying over the '07 Tundra engines doesn't mean Toyota isn't exploring possibilities for the future full-model makeover. Fay cites hybrids, which the auto maker is exploring in a partnership with Ford, and diesels as two study points.

"Diesel isn't out of the question, although it's not imminent," he says.

Also not off the table is a possible heavy-duty version of the Tundra, although Fay says few owners surveyed have requested such a model.