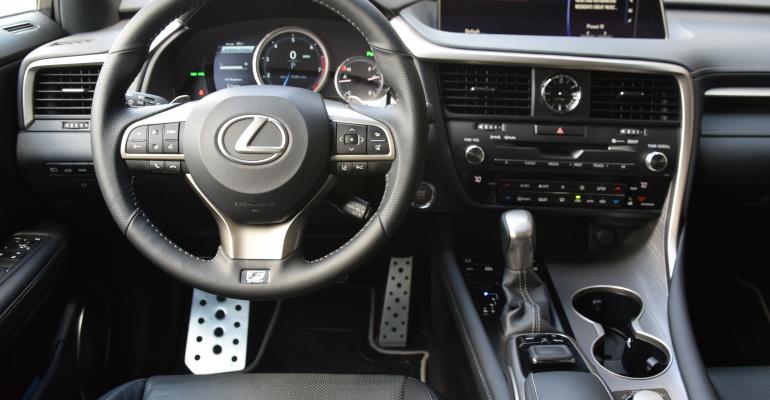 Bells and whistles don&rsquo;t make the RX a UX standout. The overall UX effect is one of &ldquo;a calm connection to an otherwise busy world.&rdquo;

When Lexus unveiled its redone fourth-generation RX midsize luxury CUV last year, a lot of the buzz centered on its exterior styling – particularly the rather polarizing spindle front grille.
But here’s the inside story: the RX interior is top-rate, from its craftsmanship to its technology and connectivity.

Earlier this year, we recognized the impeccable interior execution by putting the RX on the Wards 10 Best Interiors list.

Bells and whistles don’t make the RX a UX standout. There are no whiz-bang surprises. Yet, the overall UX effect is one of “a calm connection to an otherwise busy world,” an editor says on his score sheet.

The navigation screen and head-up graphics are sharp and detailed. The lane-keeping assist non-aggressively gets the job done.

And the adaptive-cruise control is iron clad. Its radar readily locks on to the vehicle ahead and adjusts the speed accordingly. We drove it to northern Michigan and back in that semi-autonomous state. The ACC system quickly fosters driver confidence at a time when polled drivers express a degree of anxiety over the prospects of leaving the driving to upcoming autonomous vehicles.

One judge particularly liked that when he entered the name of a store in the RX navigation system, it gave directions and showed on the screen map where in the shopping mall the store is. That’s precision.

UX features particular to the RX include its center console computer mouse-like controller. OK, some critics don’t like it. But what’s not to like? It works easily and responsively as the user points and clicks to assorted menu items, cutting down on driver distraction.

Not to knock those spin controllers in some other vehicles, but aren’t humans by now more deft at using a mouse than a spinner to menu around? Lexus thinks so and came up with a user-friendly way to do that.

But it’s not the only way because there are multiple methods to access menus and information. Those options include a voice-command system that, unlike some others we tested, doesn’t seem hearing impaired.

Lexus has a reputation for putting much thought into its vehicles, from how they are engineered to how they are manufactured. High on that list as well is how they interact with their drivers.