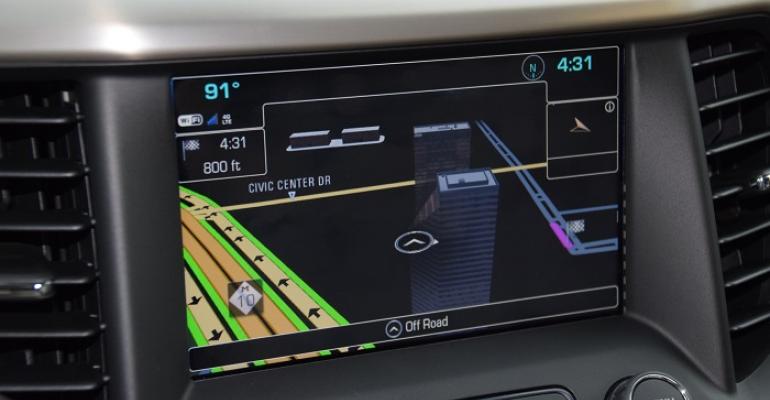 GMC Acadia Does It All, Well

The ’17 GMC Acadia Denali makes it onto the introductory Wards 10 Best User Experiences list by seemingly doing everything and doing it well.

Knocking the socks off our judges is the CUV’s excellent, natural-feeling adaptive cruise control, slowing the Acadia down and then inching it up to a stopped car ahead to close the gap.

“It gets a top score from me for excellent down-to-a-stop-and-creep mode, allowing the Acadia to function autonomously the same way a driver would in traffic,” says judge Bob Gritzinger.

The Acadia’s lane-keep assist system torques the wheel with just the right amount of pressure to keep you in your lane. And it has vivid, obviously placed icons to let you know when the system is both engaged and reading lane lines, something that surprisingly was missing from a healthy percentage of vehicles tested.

Logical and easy-to-use controls are areas where many vehicles trip up, but here too the GMC shines. “Non-intimidating and intuitive,” “simple-and-straightforward” and “a perfect balance between knobs and capacitive switches” were the findings from judges in this category.

For when you don’t want to fuss with buttons or knobs, the Acadia’s voice-recognition system is easy-to-use and accurate.

It’s debatable where the Acadia shines best, but this judge loves its maps and navigation system. Our office complex never looked as good as it does on the CUV’s map, which renders it eerily accurate. Judge Gritzinger and I also loved how the central control knob, which typically controls audio system volume, pulls double duty and becomes a zoom in/out knob for the map when it’s on the screen.

Connectivity and infotainment are other Acadia strengths, making it a great family mobile.

Not only is there WiFi to keep the kids occupied on their tablets in the backseat, it has one of the fastest phone pairings we’ve encountered, so mom or dad can safely call or send texts from behind the wheel.

“Easiest smartphone pairing this side of Mercedes,” says judge Irwin, who also appreciates how the CUV kept him abreast of the weather, not only in his current location but also at his mapped destination.

The GMC boasts a spectacular five USB ports – two in the front row, two in the second row and one in the often-neglected third row. It also has the rarest of features, a 120V AC outlet in the second row, negating the need for an adapter for devices needing to be charged.