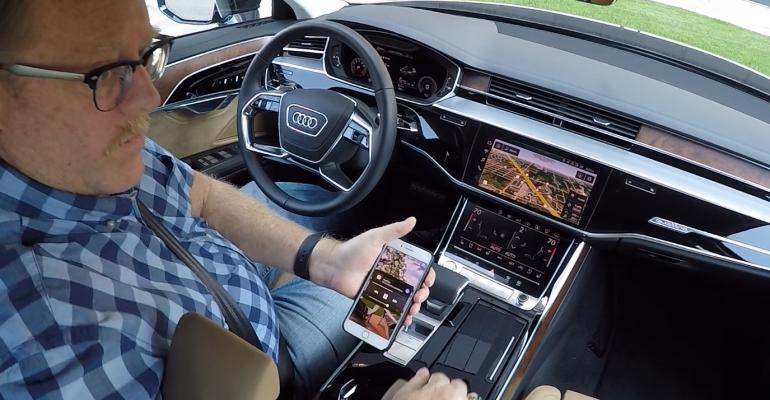 How many Easter eggs can fit in a luxury sedan?

With its ’19 A8 L flagship, Audi has demonstrated the long-wheelbase cruiser is as adept at chauffeuring kids to school as it is CEOs to boardroom meetings. It is loaded with hidden elements that surprise and delight, enhancing the user experience.

The unexpected treasures come quickly with the four-ringed Audi logo lighting up the full-digital instrument cluster at startup.

For these thoughtful features and so much more, the fifth-generation Audi A8 L earns a 2019 Wards 10 Best UX award.

Other standout add-ons in the A8 L include wireless Apple CarPlay; voice activation that works flawlessly with natural speech and can be used to read and compose text messages; a colorful head-up display loaded with content; and four-zone climate control to allow each occupant’s own personal biosphere.

The visual center of the A8 L is the third-generation of its MultiMedia Interface, a high-definition display screen which until now was controlled with a large rotary dial ergonomically placed in the center console.

In this latest iteration, the dial is gone (and missed by some) but replaced with two high-resolution tempered-glass touchscreens thoughtfully designed: a 10.1-in. (26-cm) upper screen for infotainment and an 8.6-in. (22-cm) screen placed directly below it at a slight angle for controlling air conditioning and comfort features. 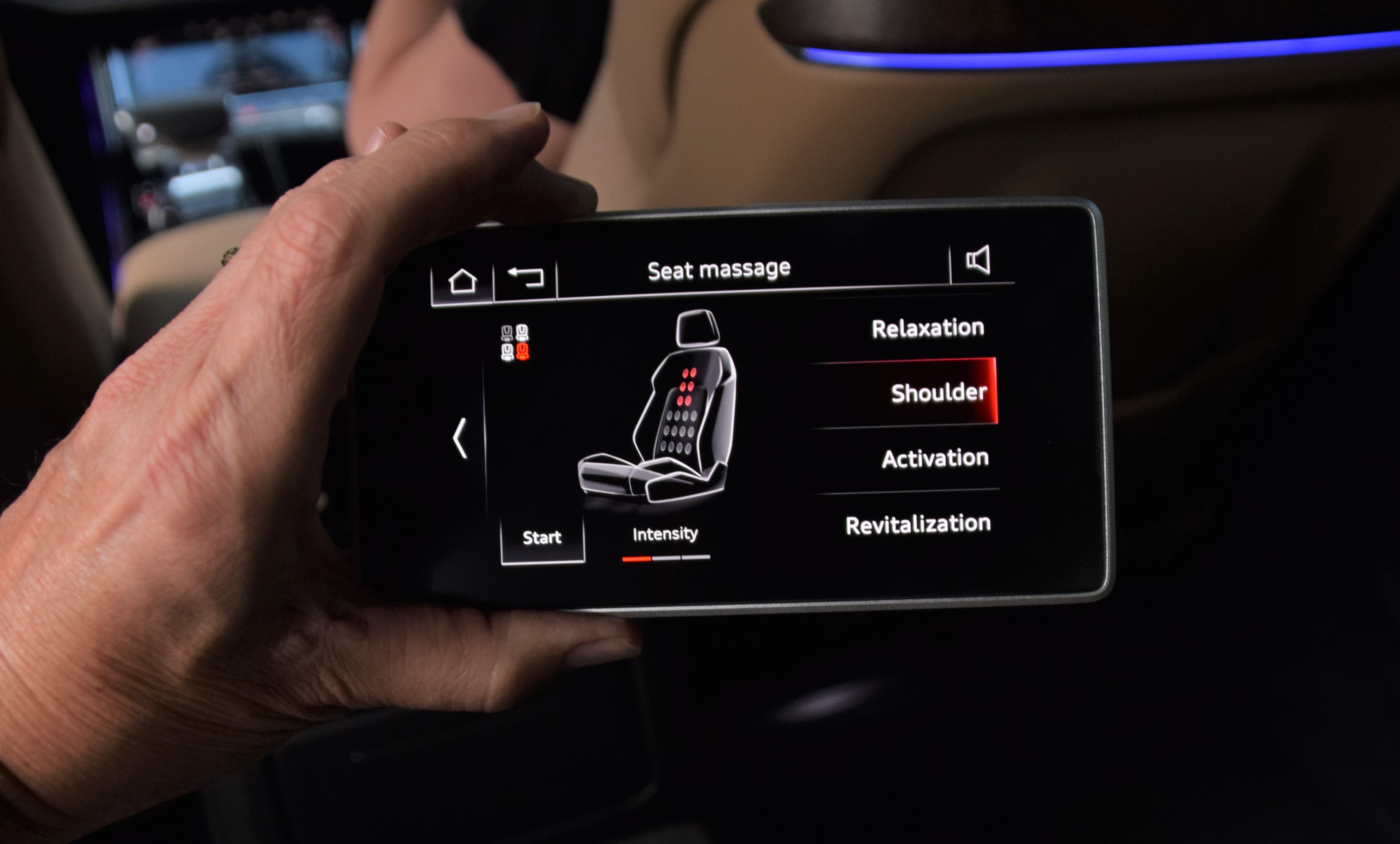 Without a center-console dial, the new system for ’19 models is known as MMI Touch Response, and the name becomes apparent when the driver senses haptic feedback in the form of a mechanical pulse created by an electromagnet moving the spring-mounted display ever so slightly. It feels like you are pushing physical buttons.

Menus are user-friendly, intuitive and simple to navigate. Want to customize the upper screen? Press a tile and hold for a second – a brief vibration will confirm the selection, and now it can be moved where you want on the main menu.

The upper screen can be turned off, and it blends almost invisibly into the high-gloss black trim that sweeps across the instrument panel to the passenger door.

One might expect the high-gloss upper screen to reveal too much glare, but the surface contains special coatings to refract reflected light in addressing the problem.

Even those who in the past found dual screens to be excessive are likely to view this Audi execution as gorgeous and highly functional.

“I think the displays are state of the art all the way around, with the best-functioning touchscreen,” Wards editor Dave Zoia writes on his A8 scoresheet. “It’s less dual-screen than it really is a second touchscreen for the HVAC controls. I think they’re ahead of the curve on that, and more brands will go that route.”

Editor Drew Winter finds the Google Earth graphics “amazing,” and there were no hiccups in routing. “The verbal cues given are spot-on, with things like, ‘Turn at the traffic light’ instead of, ‘Turn in 300 ft.,’” Winter writes on his scoresheet.

The A8 L has seemingly every driver-assistance feature available in the market today, and the stop-and-go adaptive cruise control took at least one editor through miles of slow-moving traffic in construction zones.

Not to be forgotten is the Audi Virtual Cockpit (pictured above), a full-color digital gauge cluster that has been dazzling us since the Audi TTS 2-seater won a 2016 Wards 10 Best Interiors trophy.

In the A8, the Virtual Cockpit graphics are new, and all pictograms are accurately proportioned. The driver can configure the 12.3-in. (31-cm) display umpteen different ways to include conventional gauges, infotainment, vehicle settings or even a wide-screen map that helps keeps eyes on the road.

In the second row, our A8 L came with a removable OLED remote control tablet that allows rear-seat passengers to tailor their experience and control just about everything in the car but the steering wheel and pedals.

Sure, with this much content, the A8 L is expensive, as our test model stickered at $101,095.  “But it’s one of the best showcases of UX and ADAS technologies at any price,” Winter writes.

Assembled in Neckarsulm, Germany, the A8 L comes equipped with Audi’s ground-breaking 48V mild-hybrid system, which, one could argue, enhances the user experience by boosting fuel economy and reducing the frequency of stopping at the pump. 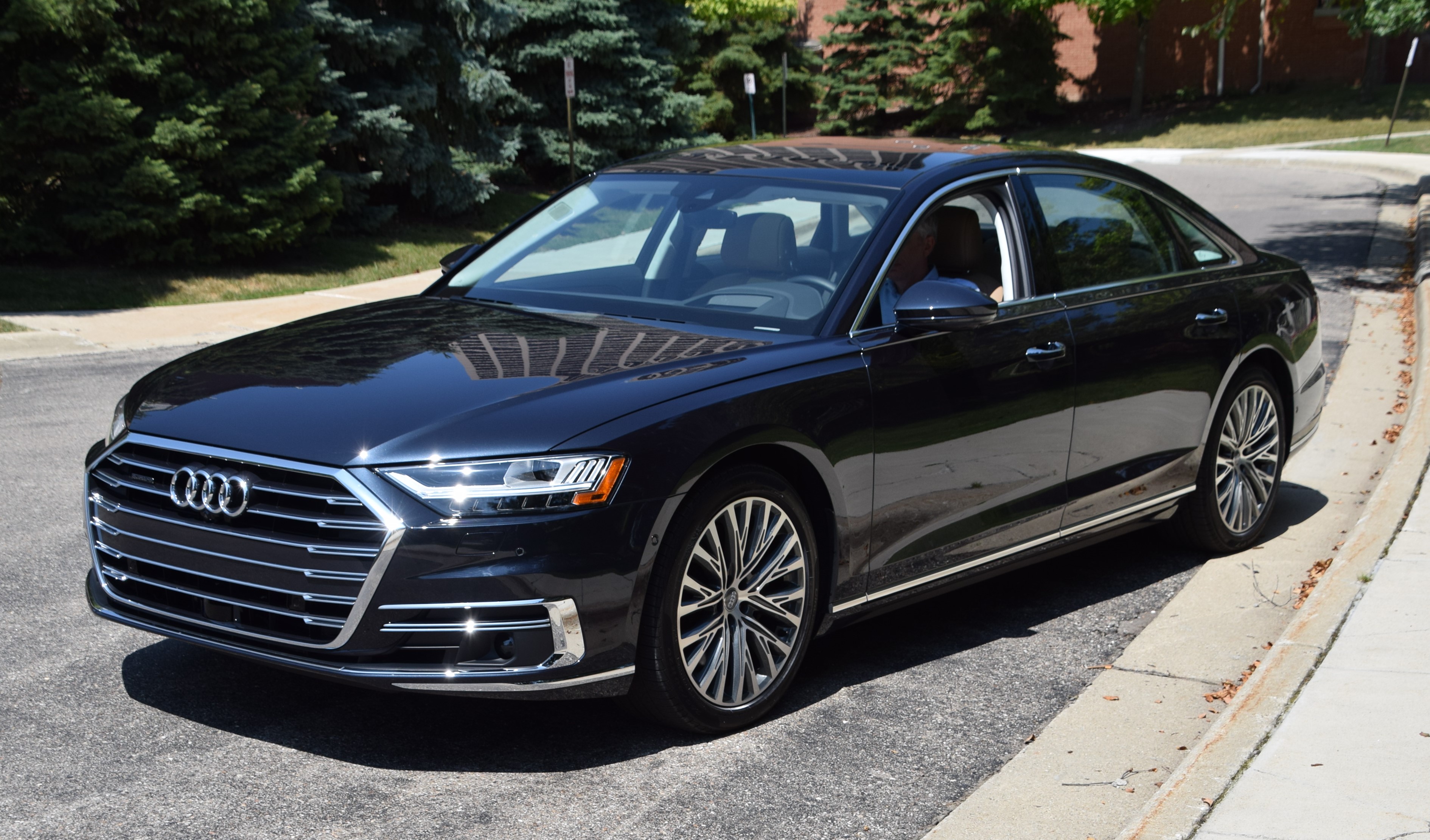