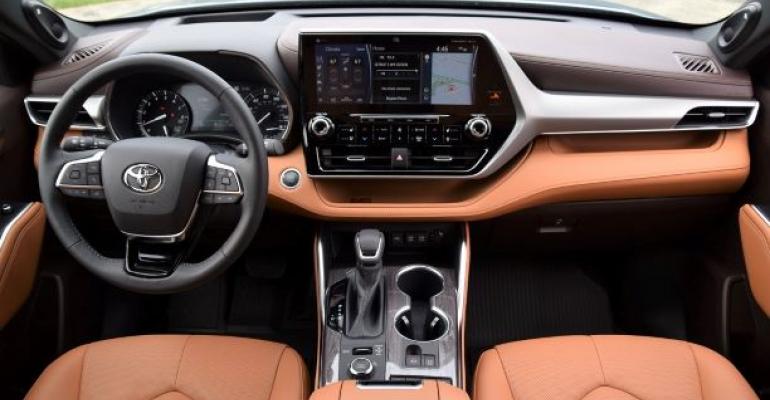 Facing competition in the hottest segment of the U.S. market, the Toyota Highlander is enhanced with a poised redesign, a generous portion of new content – and claims a 2020 Wards 10 Best Interiors award.

The focal point of the all-new, sixth-generation Highlander’s interior is an instrument panel resembling a tuning fork turned on its side and housing an infotainment screen measuring 12.3 ins. (31 cm), large by Toyota standards. In another contrast with Toyotas of the past, Wards judges find the screen resolution excellent.

The IP offers a pair of handy cubbyholes and, in the Platinum model we tested, was rendered in a warm caramel color that matched the leather seats, soft-touch center console and door inserts. The screen is framed in piano-black trim, and glossy wood-like and carbon-fiber highlights lend an upscale feel elsewhere. Diamond-pattern perforations distinguish the seats.

The charger nests inside a center console whose sliding lid is “a big win and puts (the) clunky and obtrusive lifting lid out to pasture where it belongs,” Schweinsberg says. 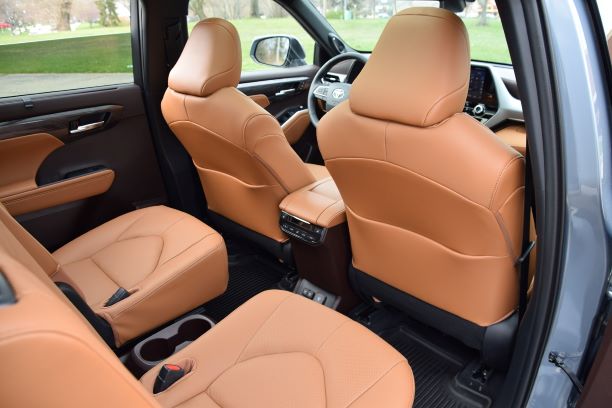 For the big trip to Ikea, second-row seats fold nearly flat as well, providing a large, even load floor.

Editor Tom Murphy writes on his scoresheet: “Highlander reminds me of (the Toyota) RAV4 interior that was a winner last year: Great first impression, interesting color scheme, clever (and plentiful) storage bins, very comfortable, quality materials. For me, it checks all the boxes.”

The Platinum trim level tested by Wards editors was priced at $51,654, not an unreasonable sum to editor Dave Zoia: “Was surprised at first by the price, seemed high. But Highlander presents a good value here. Very well equipped and nicely designed overall.” 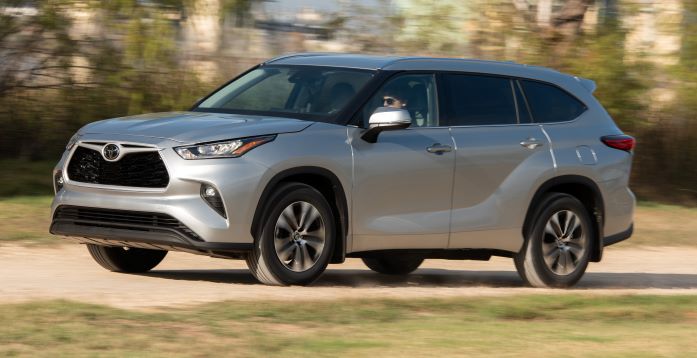