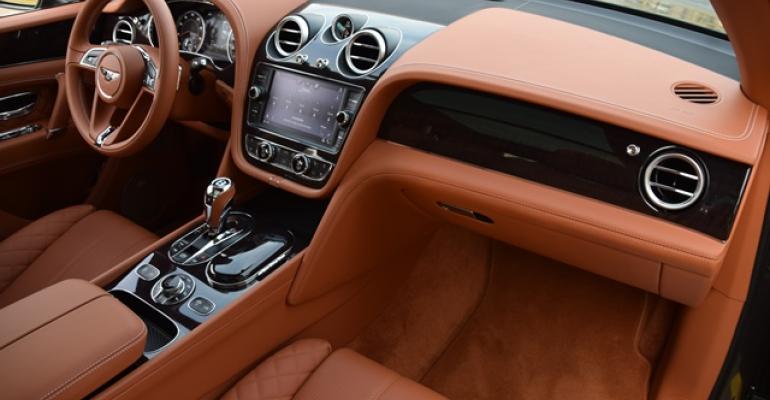 Bentayga: Knurled, Burled and Out of This World

It takes 130 hours to build Bentley&rsquo;s new SUV &ndash; much of it by hand &ndash; and six of those hours are spent crafting and stitching the steering wheel. At $278,730, it truly defines the term, &ldquo;pretty penny.&rdquo;

Of course, a vehicle that sets you back $278,730 had better have a great interior. In addition to massaging seats, one might argue it also should come with a real-live, full-time therapist and fold-out massage table.

The Bentley Bentayga does not come so equipped, but it doesn’t need to: Its cabin is breathtaking for its rich use of chrome accents, burled California walnut, creamy leather and a standard panoramic roof that lets in copious amounts of natural light to illuminate all the lovely features. Oh, and the massaging seats in both rows are spectacular.

But the conversation about the Bentayga interior must begin with the “Newmarket Tan” leather, best described as burnt orange and conveying the lusty grace and sure-footed confidence seen each year on Oscar’s red carpet. This color is so enthralling that a secondary accent hue (beyond the large planks of dark walnut) would detract from the aesthetic. In this case, monochromatic is best.

This isn’t just leather. The pristine hides of 15 Scandinavian bulls, raised in bucolic hills free of barbed wire and bugs, have been lovingly preserved to cover the entire headliner, pillar trim, visors, doors, instrument panel and the inside of two hefty wood and metal sunglass holders. The material is distinctively diamond-quilted on seats, doors and the optional fold-out, tailgate-ready, two-person event seat.

The leather swathes the steering wheel, which practically stands by itself as a work of art. It takes 130 hours (staggering in the age of high-volume production) to build a Bentayga – much of it by hand – at the plant in Crewe, U.K., and six of those hours are spent crafting and stitching the steering wheel, alone.

Not to be overlooked are the deep-pile floormats, the heritage organ-pull vents, brushed aluminum pedals, chrome undercarriage to front seats, the sharply knurled brushed metallic finish on vents and the gear shifter and, finally, the swoopy lines of the instrument panel that flow like the wings of an eagle.

But the Bentayga is not just a showpiece. Leveraging the infotainment architecture of parent Volkswagen Group, the Bentley SUV delivers a first-rate user experience with quick Bluetooth phone pairing and responsive voice activation.

Working well are driver-assistance features, such as adaptive cruise control, lane keeping, hill descent, blindspot warning and automatic emergency braking. Autonomous vehicles are on the way, and the Bentayga already is close to having a virtual chauffeur.

Buying a Bentayga can be simple or complicated. The quick route has the customer choose from 15 leather colors, 15 veneers and 4- or 5-passenger seating, although a 7-seat version is headed to the U.S. as well.

But what’s $50k in options between friends?

The more complex and expensive path has the customer personally visiting Crewe for a consultation with an advisor and a tour of a special “Bespoke” showroom filled with hundreds of veneers, leathers, carpets, metallic finishes and colors, allowing the discerning client to have a one-of-a-kind Bentley, exactly as he wants it.

That route takes longer and will be a lot more expensive, defining the term “pretty penny.”