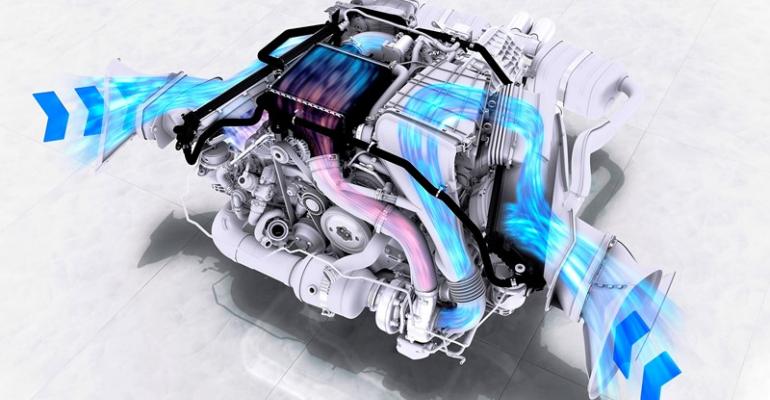 <p><strong>The new 2.0L and 2.5L engines represent the first time Porsche, which has a rich legacy of horizontally opposed piston engines, has developed one that combines turbocharging and only four cylinders.</strong></p>

AUSTIN, TX – The last time a turbocharged 4-cyl. was available in a Porsche sports car in the U.S. was 1991, the year production ended of the 944, a 2+2 coupe and convertible.

The inline 4-cyl. came in displacements of 2.5L, 2.7L and 3.0L, and certain versions were naturally aspirated. Output ranged from 143 hp at launch in 1982 to 247 hp in the 944 Turbo S as the model run ended. The 3.0L was the largest 4-cyl. production engine of its time, and this engine family was part of the industry’s steady migration toward dual overhead cams and four valves per cylinder.

It’s still too early to detect a trend among buyers, but historically Porsche has sold more base Boxsters and Cayman S models. Until now, the cars only had 6-cyl. boxer engines. The new 718 Boxster went on sale in the U.S. in June, and the 718 Cayman arrives in November.

The new engines represent the first time Porsche, with a rich legacy of horizontally opposed piston engines, has developed one that combines turbocharging and only four cylinders.

The single turbochargers, supplied by BorgWarner, are unique to each engine. The 2.0L with a conventional wastegate benefits from 20.3 psi (1.4 bar) of maximum boost, while the 2.5L employs a variable-turbine geometry unit that produces 14.5 psi (1 bar) of thrust. This turbocharger is similar to the one previously used in the Porsche 911 Turbo.

Porsche engineered both the 4-cyl. engines about the same time as the 370-hp 3.0L twin-turbo flat-6 in the 911 (which began production in Germany in September 2015).

“All three are based on the same technology, so we have a lot of synergy between those engines,” says Markus Baumann, manager of boxer engines at Porsche.

The aluminum blocks and heads are made on one assembly line by one supplier. The automaker tried to use plastic for the oil pan but ultimately needed aluminum because of thermal challenges.

Baumann calls the overall strategy with the new engines “turbo rightsizing” instead of downsizing.

“We get 300 hp, and these engines are good at low revs and at high revs,” Baumann tells journalists here during the media launch of the 2.0L and 2.5L powerplants in the new mid-engine 2-seaters.

Cooling Challenges; Faster in Every Way

Baumann says the boxer layout contributes to the cars’ low center of gravity, which makes for excellent handling, and he’s impressed with the everyday usability of both the 2.0L and 2.5L.

Cooling these boxers was a challenge in such a compact, concealed engine compartment.

Air enters through two large intakes positioned on either side of the car, in front of the rear wheels. Some of the air cools water in the low-temperature air-to-liquid cooling system, which in turn chills the intercooler.

The rest of the air feeds the turbocharger, where it is compressed and heated, then cooled before entering the engine for combustion. The system is designed to consume lots of cool air during spirited driving.

The new 2.0L is about 11 lbs. (5 kg) lighter than the previous-generation 2.7L naturally aspirated 6-cyl. boxer, while the new 2.5L turbo-4 weighs about the same. Only a few screws carry over from the old engine.

The fully variable oil pump, designed to be compact, is 3.8 lbs. (1.7 kg) lighter than the one it replaces. Similar to the one used in the 911, the pump regulates oil pressure depending on driving style. On the racetrack, for instance, where lateral forces are extreme, the pump applies higher pressure to ensure proper lubrication.

Another interesting new technology is a switchable water pump, which can turn off the cooling system under certain conditions, allowing the engine to heat up more quickly.

Both the water pump and oil pump came from Porsche’s parent, Volkswagen Group, which uses similar versions of them on other engines.

Other than that, Baumann says there is no powertrain architecture or component sharing between Porsche and the rest of the VW Group for these new engines.

Overall, Baumann says efforts to reduce weight of both the engine and car have paid off: Faster in every way, the new 718 Boxster can sprint to 60 mph (97 km/h) in 4.9 seconds with the 6-speed manual transmission or 4.7 seconds with the 7-speed PDK dual-clutch.

In some comparisons, the new cars are 0.7 seconds faster than the previous model with the 2.7L. “Since I have been working on boxer engines, we never had such a big step from one car to another,” Baumann says. “There’s a large improvement in torque. You feel it on the street in all-day driving and on the race track.”

Premium 98 RON fuel is recommended for both engines. He says they will run fine on lower-grade premium fuel but with diminished output.