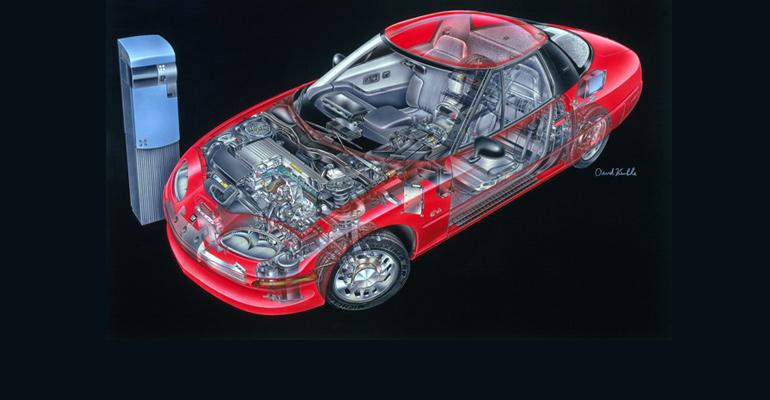 Ultimately, just 500 ’97 EV1s were built and 400 leased, followed by about the same numbers of ’99 Gen II cars (no '98s). Lessees loved their EV1s, but today they enjoy much more and better choices.

This is the third in a series of articles highlighting powertrain trends as the Wards 10 Best Engines competition celebrates its 25th year.

Twenty-two years before today’s electric vehicles were routinely topping 200 miles (322 km) of range, there was the ground-breaking battery-powered EV1 from General Motors.
Available for lease in five Western cities for two model years (1997 and 1999), it was the subject of a 2006 documentary that gave little credit to GM for spending a half-billion dollars to develop it and disengenuously trashed GM for canceling it.

The vision of future transportation appeared at the Los Angeles Auto Show in January 1990: a bullet-shaped coupe designed by GM and co-engineered and developed with high-tech California contractor Aerovironment. Environmentalists cheered while EV skeptics scoffed and politicians plotted to force-feed it to the public.

It looked great, sprinted from zero to 60 mph (97 km/h) in 8 seconds and had achieved in one Arizona test a remarkable 125 miles (201 km) of range, better than any practical EV up to that time.

So positive was press and public reaction to it, then-CEO Roger Smith announced on April 22 GM’s intent to produce such a car.

“We recognized the obvious shortcoming of EVs,” recalls executive director Ken Baker. “Our plan was to be battery agnostic – take the best available and focus on engineering the world's most efficient vehicle, which would give dramatically better performance once a better battery came along.”

A key goal was to see how quickly and efficiently GM could do an all-new, ground-up car. Driven by a new systems engineering approach, the timing target was 36 months.

Then, on Sept. 28,1990, California's Air Resources Board mandated the state’s seven top-selling automakers dedicate a share of their California sales – starting at 2% – to zero-emissions vehicles.

No business wants to be told how many of anything it must sell, because nothing can force people to buy something they don't want. But that was the requirement.

Meanwhile, GM was going broke. Jack Smith was installed as CEO in 1992, and he proceeded to cancel or delay a number of product programs, including the nascent EV. Nearly everyone wrote it off as canceled.

But while three-quarters of the group was reassigned, a core team of roughly 100 engineers relocated to an off-site facility in Troy, MI, and continued development. Baker was promoted to R&D vice president in April and kept the program alive under that organization.

A batch of 50 proof-of-concept prototypes was hand-built and prepped for a 1994 “PrEView Drive” program that loaned them to regular folks for three months at a time in a dozen U.S. cities. Drivers liked them and provided mostly positive feedback.

In March 1994, with the corporation's finances recovering, Bob Purcell, then executive in charge of corporate strategy, was appointed to revive the EV program and “make a business of it,” meaning lead the industry in EV technology and sell it to other automakers if possible.

They worked in parallel on three generations: Gen I with PbA batteries, Gen II with optional range-doubling nickel-metal hydride batteries and Gen III with more affordable, long-range lithium-polymer batteries that 3M Corp. and others were developing. Because Gen I’s 1,175-lb. (533-kg) pack of 27 advanced PbA batteries held a mere half-gallon of gasoline-equivalent energy, the production EV1 (as it was later named) would have to be an incredibly efficient two-seater to achieve even barely acceptable range.

The development team rethought and reinvented virtually every element of the modern automobile, which brought such breakthrough technologies as the first heat pump automotive HVAC, electro-hydraulic power steering and power-blended, electro-hydraulic regenerative braking. With a teardrop shape perfected by many hours of wind-tunnel tuning, its drag coefficient (Cd) was an astounding 0.19.

Powered by a 137-hp AC induction motor through a dual-reduction gearset, it delivered respectable ride and handling on its narrow, 50-psi, low-rolling-resistance tires.

Gently driven in warm temperatures, it could achieve 50-70 miles (80-113 km) in city driving, somewhat more on the highway, and could be charged in about four hours using GM's innovative, all-weather “inductive” 220V charger or 12-16 hours on 110V.

Because of limited production due to component (especially battery) availability, unacceptable cold-weather range and very limited public-charging opportunities – EV1s were marketed first only in Los Angeles, Phoenix and Tucson, AZ; San Francisco and Sacramento followed, but the optional ’99-model NiMH batteries were not offered in Arizona because, at that early stage of development, they performed poorly in hot weather.

Ultimately, just 500 ’97 EV1s were built and 400 leased, followed by about the same numbers of '99 Gen II cars (no '98s), some with optional NiMH batteries. At that point, GM pulled the proverbial plug. Until a practical, affordable gas-competitive battery technology could be developed, there would be no GM EV2 or EV3. Toyota, Honda, Ford, Chrysler and every other automaker with EV aspirations also gave up, and California eventually was persuaded to back off its ill-considered sales mandate of technology that was nowhere near market ready.

Proprietary technology concerns, serious liability risks with aging 300V batteries and state laws requiring parts and service support for years after sale led GM to lease, not sell, those early EVs, and are why they had to recall and destroy them when the leases were up.

It made those 800 or so lessees, who genuinely loved their EV1s and did not want to give them up, extremely unhappy.

But they enjoy much more and better choices today.